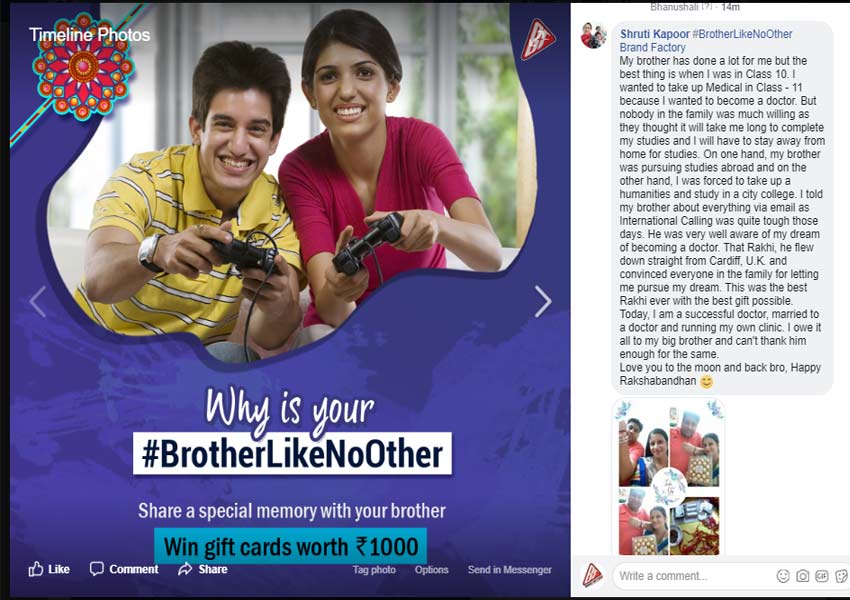 Brand Factory wants to make this Raksha Bandhan a unique experience for siblings. While the world focuses on highlighting just the sibling bond, Brand Factory took a different route to showcase not just the bond but how a brother plays a larger role in a sister’s life. The brand believes that there are unimaginable ways a brother supports a sister no matter how challenging and sometimes unachievable her dreams may seem.
Hence, this Raksha Bandhan, Brand Factory has introduced the #BrotherLikeNoOther campaign. This campaign is their attempt to celebrate those brothers who help their sisters chase and achieve their dreams. Dreams that are often shunned by society, but how a brother will only encourage and coax his sister to chase her dreams.
The campaign began during this week across the brand’s social media handles, Facebook, Twitter and Instagram. The concept of #BrotherLikeNoOther has been brought to life through a series of posts, contests and more that urge participants to share their experiences of how their brother has been a solid support system. The content connected well with audience which was proved by heart-touching sibling stories received on each post. The campaign was further amplified through FB posts which promoted Brand Factory gift cards. Through website integration purchasing gift cards became easy. At the very beginning of the launch, the campaign has received an exhilarating response of more than 6.5 million reach across its various social media platforms.
Simultaneously, mega influencers like Smriti Mandhana, Rajvee Gandhi to name a few and community pages like Awesome Things in India, Scrawled Stories will be joining the #BrotherLikeNoOther campaign soon.
To break the monotony of the generic brother-sister Rakhi commercials, here’s a fun and quirky one-minute video conceptualized by Publicis Ambience. The video explains, no matter how crazy, how many demands; a brother can fulfill his sister’s wishes because Brand Factory has a deal for every demand. The video is live on its social media platform and has crossed over 1.5 million views already.
Link: https://www.youtube.com/watch?v=B19YgGUHlb8
Roch D’Souza, Chief Marketing Officer, Brand Factory commented, “During festivals and occasions Brand Factory would like to be more relevant through its offerings and fabulous discounts, to its customers. Through Raksha Bandhan Campaign, we wanted to highlight a role what brother can play in the sister’s life. He is an enabler and believes in encouraging her to follow her dreams. Be it a career choice or pursuing a passion in life.
We had a holistic 360-degree communication approach and have been getting immense responses via personal stories and visuals, through our campaign thought of #BrotherLikeNoOther. This campaign was extended to all our stores through the gifting options for a sister be it Shoes, Handbags, Womenswear and has helped drive women walk-ins to our stores.”

Ashish Rana, Business Head, IdeateLabs says, “Our idea was to pay tribute to this great festival of Raksha Bandhan by highlighting the bigger role of brothers. And digital exploded the #BrotherLikeNoOther campaign by weaving a story around brothers who pushed their sisters to achieve their dreams. The content did work wonders as our social media handles were flooded with sibling stories. Now, we will take this campaign to the next level with digital influencers and community pages.”

Commenting on the campaign, Bobby Pawar, MD & Chief Creative Officer – South Asia, Publicis India said: ‘Brand Factory is a brand that disrupts the category, so we came to the obvious conclusion, how can its advertising be otherwise? When convention dictates that you show good-looking people who ooze an ‘effortless’ ‘aspirational’ ‘youthy’ attitude, we went in the opposite direction. Hat tip to Roch and his team whose eyes lit up when we said, ‘The film opens on a spunky old woman, who shows off her new clothes for her even older brother.’ Execution aside, what really works for this idea is a simple human truth that when you get an amazing deal (Brand Factory offers 20-0% discounts, every day), you are motivated to be even more generous.