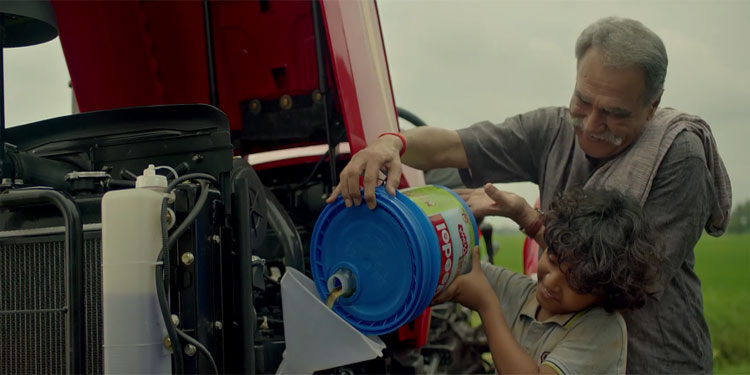 In the competitive era that brands operate in today, it is important for them to make product improvement a continuous practice so that they continue to stay ahead of the race. Over time, this practice almost becomes a tradition that gets handed down from one generation to another. Adapting to this trend and catering to the needs of modern-day tractors is Veedol Tractor Oils, that has been following this practice for decades.

Veedol has unveiled its latest campaign that celebrates this evolution through a powerful thought – the tradition of staying modern. The objective is to reinforce Veedol’s unique position in the tractor lube market – a heritage brand that has continually kept in step with changing technologies.

The campaign that has been conceptualized by Lowe Lintas Kolkata, comprises a video film and other traditional assets like outdoor and print. It has been launched in the Southern markets of India initially and will be rolled out across other states soon.

Commenting on the campaign thought, J Ramesh, Executive Director, Tide Water Oil Co (India) Limited said, “Veedol has been a pioneering brand in tractor oils and greases, with a strong market presence over decades. Veedol continues to have excellent equity in traditional tractor markets in India. This campaign leverages Veedol’s heritage while reinforcing its core value of continual reinvention to keep in step with changing technologies. ‘Modern rehne ki ek Parampara’ – the campaign tagline captures this essence though endearing slices of life from the Indian heartland. With this campaign, we aim to reinforce Veedol’s promise of trust amongst all consumers of tractor oil, based on the brand’s impeccable credentials and leadership position.”

Adding his thoughts on the campaign idea, DK Guha, Executive Director, Lowe Lintas Kolkata said: “Veedol’s range of specially-formulated engine oils for tractors has always kept pace with modernization in tractor engines. With India poised to become one of the largest tractor markets worldwide and the improvement in rural economy, the timing couldn’t have been better for Veedol to launch its new Tractor Engine Oil campaign. The challenge for the agency was to leverage Veedol’s heritage in the tractor oil segment on the one hand while highlighting its modernity on the other. This evolved into an interesting idea that finally became the core of the campaign.”

In the video film, the slice of life frames capture a little boy, in idyllic rural surroundings, enjoying those simple pleasures of childhood that haven’t changed over time. From the joy of swinging on a tree on the way back from school to clever ways of prying open a walnut. Sequences that on the one hand evoke strong memories and on the other are equally endearing because they have remained unchanged till this day. Almost ritualistic. Just like the ritual of helping Dadaji pour Veedol engine oil in a tractor.

Explaining the creative thought process behind the campaign, Vasudha Narayanan, Executive Creative Director, Lowe Lintas said, “Firstly, to work on Veedol tractor engine oil – a hardcore rural brand was what excited us the most. A look at the Indian agricultural landscape and the lifestyle of the people who live there revealed that advances in technology hadn’t diluted their values and traditions one bit. The people who ploughed their fields with the latest, most advanced tractors still live the same simple lives that the generations before them did. Especially the kids. From this very dichotomy was born the idea. Veedol, over the decades, have been so consistently improving their products in stride with the development of modern-day tractors – it’s almost become a ‘tradition’. And hence ‘Modern rehne ki ek Parampara’.”

The film has been launched across popular channels in the Southern markets and will be rolled out across other states soon.

MyTeam11 appoints Dentsu X as the Digital agency on record