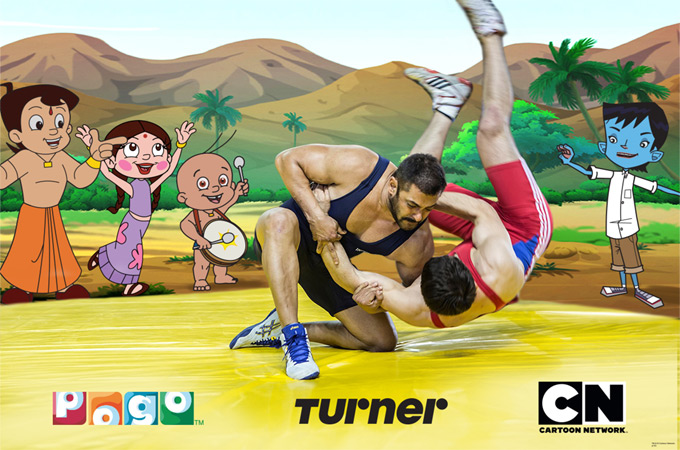 Kids now have an extra dose of entertainment as Turner International partners with Yash Raj Films for their upcoming movie Sultan to bring the big screen magic on television. The association brings two new specials on POGO and Cartoon Network with Sultan’s sports-drama story to entertain the children.

Salman Khan in his ‘Sultan’ avatar will be seen giving life-saving tips and encouragement to face challenges in each phase of life in these new TV specials created especially for his fans.

Dhobi Pachhaad with Sultan and Kris from Roll No.21 on Cartoon Network

“Wrestling is not a sport; it’s about fighting with the fears that lies within”. Bringing his thought to life, in this special Sultan and Kris will highlight their inner strength of bonding and accepting to change the world upside-down for the ones they care for.

In this special episode, the Haryana ki shaan, Haryaana ki jaan – Sultan Ali Khan will give Mathura ka Kris tips on wrestling the odds of life. He will teach Kris and the audience on how they can do ‘do do haath’ with the challenges that life throws at them.  ‘No matter what, never give up’ will be the ‘daanv’ that Sultan will teach the kids while gearing them up for dhobi pachhaad, Haryaanvi ishtyle! Kyunki, Baby ko ye bhi pasand hai!

This special episode on POGO will highlight the core values that both Sultan and Chhota Bheem stand for. Both lead characters will look at drawing parallels from their lives that talk about the beliefs and never-say-die attitude to win love and affection. It will be an inspiring episode for the younger audience who look up to these idols.