Aditya Singh Rajput to Feature in a TVC with Hrithik Roshan 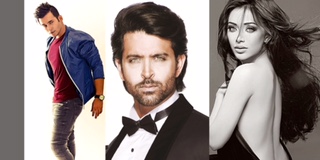 Hrithik Roshan to feat for his next Deodrant TVC as a saviour for girls featuring two super models playing their respective roles for this Big TVC. Aditya Singh Rajput the top model of advertising will be seen playing a super cool brat  and Angela Krislinzki who again have featured almost with all top Bollywood actors and been doing some sizzling south songs lately plays a beautiful girl next door. She plays a positive girl where as Aditya Singh Rajput plays a negative brat in the TVC with a super interesting twist how she is saved by Hrithik Roshan in the TVC.

It’s a super funny and cool concept, Angela said and she can’t wait for the TVC to go on air.

The TVC is again casted by one of the top casting directors Neha Bhattar. Aditya Singh Rajput says working with Neha is always super fun. She is a hard task master while casting but gets the best out of us. Ad film maker Lloyd Baptista, who is known to make super sleek TVC has directed this cool one.

Altbalaji’s Series Gandii Baat Is Back With A Special Episode