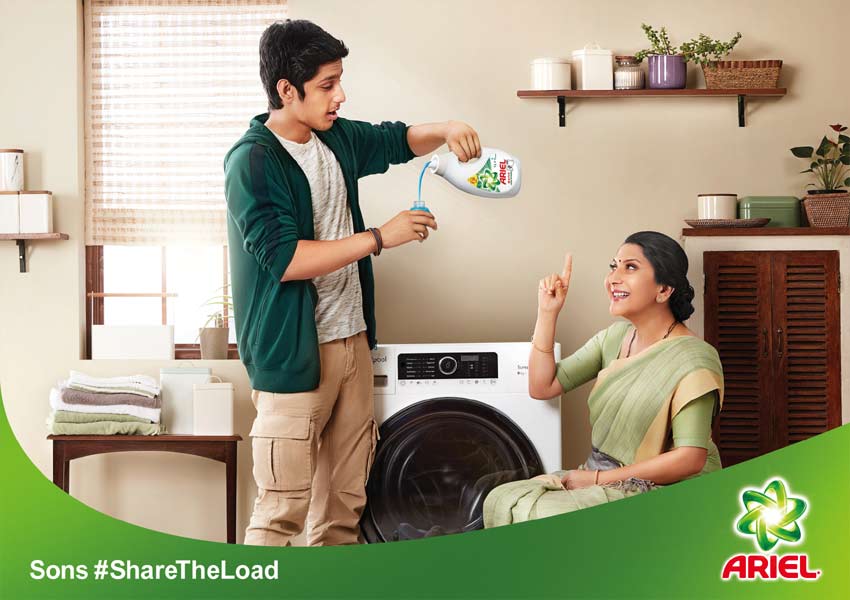 Ariel has been unearthing the reality of inequality within households since 2015 with their award-winning movement #ShareTheLoad. The movement was started in India to address this equality, aspiring for happier households where men and women share the load equally.  Towards this, Ariel has continued to raise pertinent questions that make the audience think, introspect and act. And over the years, this has had a significant impact. More men today are sharing the load than ever before. In 2015, 79%* men thought household chores are a women’s job. In 2016, 63%* men thought household chores are a woman’s / daughter’s job and ‘outside’ work is man’s / son’s job. In 2018, this number has reduced to 52%*. Despite progress, more work is still to be done. Ariel continues to address the issue of Gender Inequality within households and has thus launched their third season of #ShareTheLoad because, with Ariel, anyone can get impeccable cleaning no matter who does the laundry!

In this newly-released edition of #ShareTheLoad, Ariel raises yet another relevant question- Are we teaching our sons what we are teaching our daughters?Urging mothers to be the changemakers of the society and hence relook at the way they raise their sons. While the weight of external jobs is often split between the couple, women continue to single-handedly take responsibility of the household chores. When husbands are not equipped to share the load with tasks at home, the entire weight of those falls on the women’s shoulders which in-turn impacts their career aspirations and performance at work. A survey by an independent 3rd party in 2018, also revealed that Seven out of Ten women* in India reconsider additional responsibilities at work in order to balance the responsibilities at home. With the belief that mothers have a strong empathetic point of view, Ariel urges this generation of mothers to raise their children as a generation of equals.

Through this new film conceptualized by BBDO, Ariel wants to go deeper into the reasons for this disparity and talk about the upbringing of children. Even within the same progressive households, there is often a difference in the way our sons and daughters are being raised. Of late, daughters are being raised to be strong, independent and confident to excel in all fields.  But, they continue to be the primary caretakers of households once they get married. This places unbalanced expectations and burdens on them, which can get in the way of their professional growth. While the society is changing, there is not always enough attention given to raising sons differently. For example, teaching them some new life skills like laundry or cooking, to help better manage their future and make them advocates of household equality. If not taught to #ShareTheLoad, the sons of today become the husbands of tomorrow, who may not be prepared enough to be equal partners.

Ariel believes in a progressive future and happier households, where both men and women share the load.  In 2015, Ariel raised a very relevant question – ‘Is laundry only a woman’s job?’ to draw attention to the uneven distribution of domestic chores. With the 2016 ‘Dads Share The Load’ movement, the conversation was aimed at unearthing the reason for the disparity, which is the cycle of prejudice passed down from one generation to the next.

Commenting on the Movement, Sonali Dhawan, Marketing Director, P&G India, and Fabric Care said, “This year, we reignite conversations to go deeper into the cause of this disparity. In the context of right upbringing, we urge this generation of mothers to be the changemakers for the future, and raise yet another pertinent question – Are we teaching our sons what we have been teaching our daughters? If sharing the load is taught at an impressionable age, it becomes a part of their value system. As a mother of a boy and a girl, I truly believe this is possible. I also believe that with Ariel it is possible to simplify the lives of consumers and a happier household is one where both men and women share the load. Ariel encourages men to do their bit and take up tasks like laundry because anyone can get impeccable cleaning with Ariel, no matter who does the laundry.”

Josy Paul, Creative Director, BBDO adds, “Ariel’s #ShareTheLoad has grown into an active movement for gender equality at home. It has generated greater emotional equity for the brand and has triggered a positive change in society. It is one of India’s most recognized and awarded advertising ideas.  WARC ranked it the world’s most effective campaign for 2017 and 2018. We are excited to launch the next phase of the movement. The new campaign is based on an uncomfortable truth that’s so true for today. In the film, the mother’s realization of an unspoken social conditioning and her determined resolution is thoughtful, sensitive and a big leap for society. Her simple action gives men one more reason to share the load at home.”