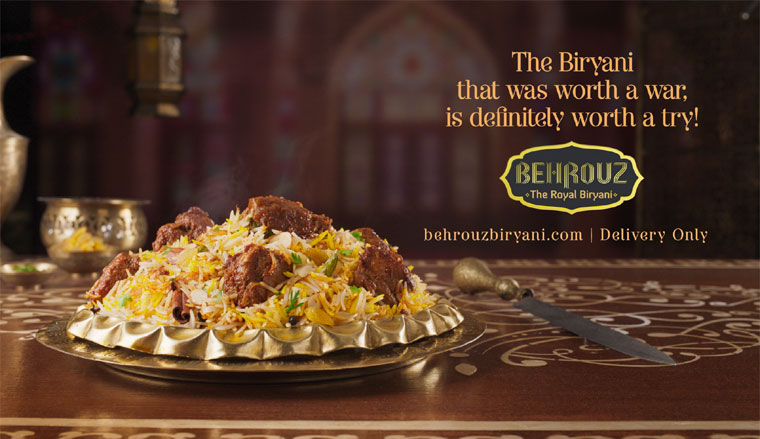 Behrouz Biryani launched its first ad campaign today. Crafted by BBH India, the film takes you through a gastronomical journey tracing the origins of biryani. This is the brand’s first integrated campaign extending across digital, print, outdoor and radio.

Mr. Sagar Kochhar, Group CMO, FFSPL said, “We are extremely delighted to launch our first ad campaign and this is an important milestone in our journey towards being the ‘Royal’ Biryani of the country. This film pivots around the brand story that we created since our inception, a 2000 year old recipe from the lost Persian kingdom of Behrouz, where wars were fought to win this recipe. Being a digital only premium brand with no physical/dine in presence, the campaign is targeted to create brand awareness highlighting its alluring Persian brand persona and a recipe worth indulging when you think of not just ordering a biryani, but actually experiencing finesse. ”

Russell Barrett, CCO & Managing Partner, BBH added, “To begin with, working on Behrouz has been great. We’ve quite willingly done a lot of research on biryanis. A lot of research. The idea of an origin story for something as ubiquitous as biryani is a story waiting to be told. The film is beautifully crafted and besides taking you on a fantastic journey through time, it makes you want to order a biryani; an impulse which you should absolutely give in to when it comes to Behrouz.”

The only biryani brand in India to scale across the country; Behrouz with a presence in 15 cities has emerged as a clear leader in the online delivery business. According to Behrouz’s market research, Biryani is the highest searched and the most ordered dish in India. However, there is no single organized Biryani player with the ability to give a superior and consistent product to the consumer across the country.

Moreover, with the food industry moving to online ordering from dine-ins, Behrouz has setup a network of 160 cloud kitchens to cater to a large geography across 15 cities at a reasonable cost.