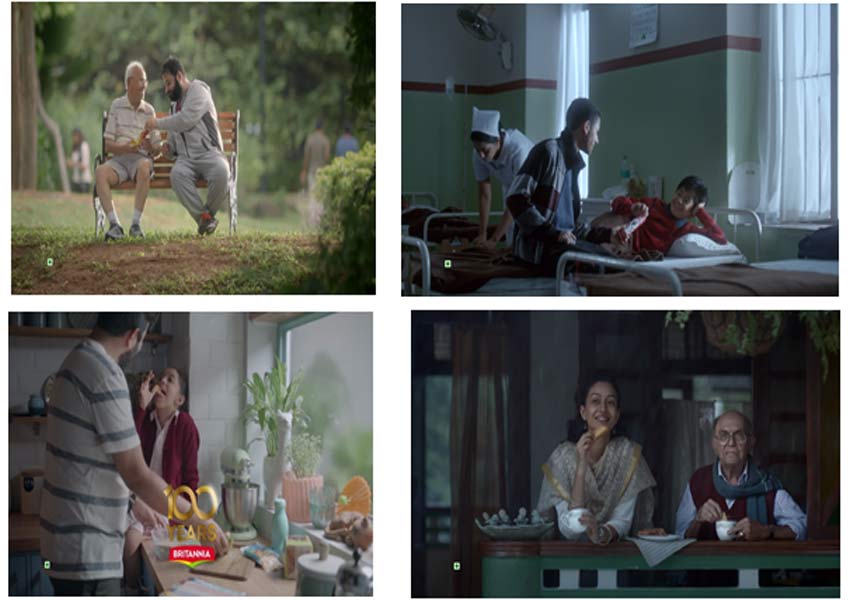 Britannia is marking its centenary year with a truly multi media campaign aimed to connect with the very heterogeneous set of audiences that its brands cater to. The campaign consists of a 10 film TVC series, a long format film for digital and social media, print, Radio and OOH.

100 years is a glorious and a big milestone – one that Britannia has reached because of the trust, love and blessings of its consumers. And the campaign is Britannia’s thank you to a heterogeneous country like India with a concept based on the thought that when you think of someone/something and if it arrives, the instant reaction you have is ‘Tu sau saal jiyega’ (You are going to live to 100 years!), an idiom which is a part of every Indian language. The stories in the TV Campaign are about how Britannia has turned 100 only because they’ve always been there for their consumers, just when they were needed most.

Each clip takes a simple situation and highlights the bond between customer and product. The campaign also builds the symphony of Britannia through its product brands and the various roles that the brand plays in its consumers’ lives.

Speaking about the TV Campaign Ali Harris Shere, VP Marketing said “Being part of every Indian household is an honor and this multimedia campaign illustrates our gratitude to the millions of Indians who wake up every day to dip a Britannia biscuit into their chai, and reach out for our products through various parts of the day. The 100-year campaign is our way of acknowledging the secret ingredient of our success – our consumers.”

Speaking about the campaign, Chairman and Chief Creative Officer at Lowe Lintas Arun Iyer, said “The brief was to thank the entire country with a simple idea that would seem relatable no matter where you are from. All 10 films are slices of life that have been picked from Britannia’s world. The challenge was to tell a brand’s story of completing 100 years and finding powerful emotions to connect with the consumers. But given how long Britannia has been a part of our lives, we found so many heartfelt moments to tell the story of a brand that has turned 100 because it’s always been there for its consumers. And the huge range of products that Britannia has gave us the room to tell stories across all age groups to make sure that campaign would resonate strongly with everyone.”

The digital film is knitted with old-world charm, adding flavors of the past, present and future while capturing a mélange of occasions across the century where a Britannia product has been integral to friendships, celebrations and togetherness.

From sharing biscuits in the classroom and cheering for a World Cup win to connecting in the selfie era and looking 10 years into the future, the film pays a warm tribute to the journey thus far and looks ahead. Speaking about the digital film Ali Harris Shere, VP Marketing said, “We wanted to create a film that would evoke strong emotion around the bonds of friendship and how these relationships evolve just as India is evolving. You see this through the parent, child relationships where we showcase how the current generation has a relationship that is a bit more playful and friend-like than previous generations. The film seeks to illustrate how Britannia has, is and will be part of all friendships, whether starting at school or looking into the future where we are sharing snacks with our robot pals.”

“Friendship seemed like a theme worthy of a hundred years and Britannia’s role in fueling those precious moments was a great story to tell. We travelled through time in the film, with the set design and camera movement designed to feel like the viewer was journeying through 100 years, revisiting one iconic friendship moment from each decade, until friendship comes back full circle with an interesting futuristic twist. From the parapet wall that fostered close friendships to the social wall that multiplied them, to walls breaking down at home, along with barriers, to make friends of family, this film is an endearing and insightful commentary on friendship even as it’s a journey through its timeline.” said Priya Shivakumar, Creative Head, JWT Bangalore.