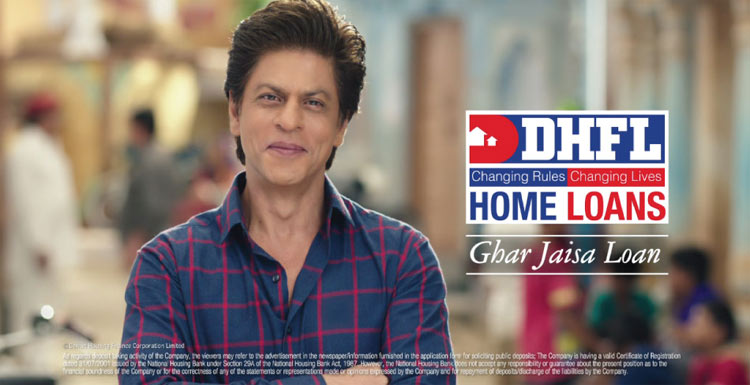 DHFL, one of India’s leading Housing Finance Companies, rolls out its new Advertising Campaign today ‘Aisa Desh Ho Mera’ with the purpose of empowering people to own their dream home in India. The campaign in association with DHFL’s Brand Ambassador, Bollywood Superstar, Shah Rukh Khan has been conceptualized by Hyper Collective Advertising agency and directed by leading Bollywood Director, Nitesh Tiwari.

The TVC captures several nuances through boundless emotions of joy, contentment and security in the lives of families living in their own homes. The TVC opens with Shah Rukh Khan saying the lines ‘Aisa Desh Ho Mera Jahaan Sab ke Sar Par Apni Chhat Ho’. Buying a home is everyone’s dream – and this dream is now a very achievable one through the affordable housing finance solutions offered by DHFL. The film highlights the right for everyone to own a home, to be entitled to a peaceful life, to create their own beautiful environment of love and happiness where children can play without any fear and limitations.

DHFL has always launched campaigns where key consumer insights have been the bedrock of the script and settings. The core brand proposition of converting “Real dreams to reality” continues to drive the brand direction. DHFL’s past campaign were focussed on sparking the thought of realizing the dream of buying a home (Sapna Campaign), saying no to excuses (Bahana Campaign), home buying is an emotion decision (Dil Se Campaign) and in the same thought the current campaign ties the core insight to the larger vision for the Country.

The campaign includes 30 second TV spots featured in five languages – Hindi, Marathi, Tamil, Telugu and Kannada – in over 50 channels. The campaign will be further leveraged on the digital, press and outdoor media for larger reach and impact amongst the target audience.

Commenting on the rationale behind the campaign, Harshil Mehta, Joint Managing Director and CEO, DHFL said, “We are delighted to roll out this campaign which focuses on building conviction amongst the LMI segment that home ownership can now become an achievable reality. DHFL’s campaign ‘Aisa Desh Ho Mera’ envisions the social upliftment that owning a home can bring to the whole nation, through fulfilling the Housing for All vision being driven by the Government. We have conceptualized the campaign with great details basis in-depth insights gathered from the brand over the years. This is indeed a unique opportunity for DHFL to reinforce its commitment to expanding financial inclusion across the country and reiterate our 33-year old vision of offering affordable housing finance to fulfil the dreams of millions of Indians.”

Capturing the essence of the campaign, K V Sridhar, Founder & Chief Creative Officer Hyper Collective said, “The new ad campaign has been brilliantly written, acted and directed to reiterate DHFL’s vision of providing Affordable Housing Finance. The campaign echoes the national sentiment of the need for every Indian to have a roof over their head and living their life to the fullest. Shah Rukh Khan has beautifully brought alive the few simple, and treasured moments of the life of a common man with so much ease and emotion.”

Bollywood Director Nitesh Tiwari said, “I have been associated with DHFL from the launch of the Ghar Jaisa Loan Campaign and it continues to be a great journey. DHFL has deep understanding of the LMI customer segment and has very effectively captured the emotional moments in the life of people when they actually consider buying a house. This campaign is aimed at a larger, noble cause of enabling home ownership to Indians driving the national mandate of ‘Housing for All’. Shah Rukh Khan has done full justice to his role of an observer of people who are able to finally live blissful moments in their own dream homes, which is made possible through DHFL’s affordable housing finance solutions.”

You can catch the TVC live on all the leading channels. You could also view it on Youtube: https://www.youtube.com/watch?v=mmKpm1YW_FE&list=PL_OrvZHs1m7pPBZ-Yil3taPffEoDtC8E0

Tags:
Previous Article
TVF pays tribute to all the teachers with this unusual story of ‘Secret Lectuaar’
Next Article
Amazon.in launches the theme for the Festive season

Amazon.in launches the theme for the Festive season
MediaInfoline Sep 06