Franklin Templeton Investments and The Better India for ‘Reach For Better’ 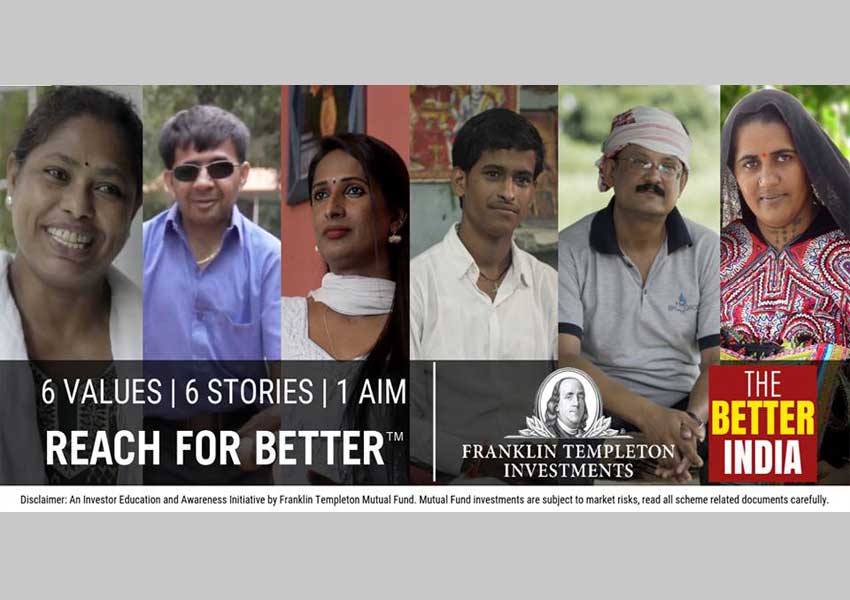 Franklin Templeton Investments (India) has launched a six-video series campaign titled “Reach for Better”, in partnership with The Better India. The campaign, encompassing real-life inspirational stories, aims to bring alive the concept of the theme through a “beyond just investments, larger than life” approach, amplifying Franklin Templeton Investments’ core thought of standing for Reach For Better.

The campaign seeks to deliver investor education messages through real-life human stories – stories of ordinary people who have had an impact on society and communities. Each of the stories is pegged to one investment pillar.

Speaking at the launch, Juzer Tambawalla, Director and Head – Marketing, Franklin Templeton Investments said, “These are stories about everyday Indians achieving something out of the ordinary. How did they do that? By having a goal, starting early, stepping up, staying resilient, seeking guidance and believing that it’s never too late to begin. We have sought inspiration from real-life individuals to draw parallels with each situation, in an effort to impart core values that we believe are instrumental while investing. Each story is an excellent example of how one can succeed by using these principles even with their own investments.”

Commenting on the launch, Balaji Vaidyanathan, Deputy Head – Marketing, Franklin Templeton Investments said, “The Reach for Better campaign draws inspiration from multiple dynamic backgrounds. It features a diverse set of individuals like a tech-savvy visually challenged person, a best-selling author who started as a domestic help, a successful transgender radio host who broke gender stereotypes, a young innovator transforming lives, an individual who revolutionized farming across the globe and a woman entrepreneur who triumphed against all odds. Each story is woven beautifully in a manner that talks about the importance of that tenet to one’s life, as well as investments.”

Talking about this partnership, Dhimant Parekh, CEO & Founder of The Better India says “As India’s only positive news platform, The Better India’s motto is to help the audience turn inspiration into impact. As a natural extension of this philosophy, The Better India and Franklin Templeton Investments have come together to tell stories about Indians who despite all odds have stayed true to their real purpose, reached for better, while making a massive impact in the lives of so many others.”

Joy Das, GM – Media Buying and Planning, Mirum India says “We are delighted to be the media partners of this campaign and play such a vital part in motivating people to Reach For Better.“

The first episode showcases the story of Kajal Brahmavar, the first transgender radio jockey from coastal Karnataka. From begging on the streets to becoming Karnataka’s first transgender RJ, Kajal’s journey has been nothing short of inspiring. Even though she faced a number of challenges in life and went through multiple highs and lows, she chose to stay resilient. Her never-give-up attitude is an inspiration for all.

It is this spirit of resilience that Franklin Templeton Investments and The Better India are celebrating through Kajal’s story. Whether in life or with your investments, staying resilient can help you #ReachForBetter.

The second episode in the series is the story of Shankar Chandrashekar – a 29 year-old techie who was born visually impaired and physically challenged. He works as an accessibility tester in a software firm, runs a YouTube channel that decodes the use of different applications for the blind, is a teacher for the visually impaired, and is also helping other people like him find the kind of freedom he has found.

Having left his hometown when he was just 3 years old, Shankar’s childhood may not have been the easiest but he consistently stepped up, faced all the challenges and learnt to live independently. And now, with his never back down attitude, he is on a mission to help others like him also live an independent life!

The third episode showcases the story of Sikanto Mandal, a 15-year-old from Mathura who has invented a Swachhta cart. Sikanto was in class 9 when he first noticed his classmates struggling to pick up waste with their bare hands. This was a part of their morning duties at the Jai Gurudev Sanstha Schoo, which provides free education to underprivileged children.

So he came up with the idea to build a manual waste lifting and dumping device. Sikanto reached out to his teachers who encouraged him to apply for the Inspire Awards by the Ministry of Science & Technology, Government of India. When he tested his final model on the school grounds, it was a raging success. From the district level of the Inspire Awards to the state and national level exhibitions, his innovation won laurels.

He might only be 15, but Sikanto’s story proves how you can start early to follow your passion and turn your life around. It is this spirit that Franklin Templeton Investments and The Better India are celebrating through his story. Whether in life or with your investments, starting early can help you #ReachForBetter.