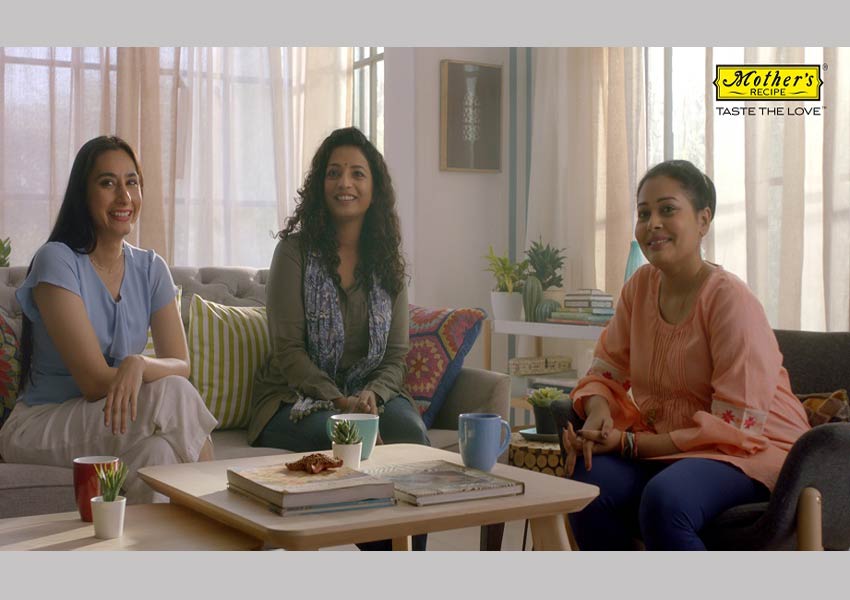 Mother’s Recipe asks women in their latest campaign #GiftofTime – a part of their “taste the love” series.Breaking the clutter with not jumping into the brand wagon of launching campaigns during Women’s day, Mother’s Recipe deliberately launched the campaign weeks after to drive home an important message that women should celebrate themselves everyday and not just on the 8th of March, Women exist outside the month of March too.

The campaign video opens with a peek into the lives of three women set against the humdrum of busy lives taking care of different roles & expectations around them. Life seems to be on auto mode, till it hits an unexpected bend, catching these women off guard. A simple question – what would you like to do if you had two hours extra in a day? It then gets them to emotionallythink about themselves which they are not used to doing, and they open up to share their interests. Mother’s Recipe then introduces them to a world of delicious& Authentic food options which is convenient &fast cooking, interestingly highlighting exactly how much time their products would help them save in the kitchen.

The video closes on a positive note with these women discovering a part of themselves in doing what they love without compromising on family & Taste.

Speaking about the campaign Sanjana Desai, Chief Strategy Officer, Mother’s Recipe, said, “In the effort to look after the entire family, the I is often lost, but as individuality is rising and the guilt slipping away, as a brand we should pave the way for her. So, with this campaign,our objective is to highlight and address a larger challenge faced today. Mother Recipe strongly believes in offering lifestyle solutions, making a meaningful difference to the lives of their consumers. With our products, we want to enable our consumers in the kitchen, enrich them and not replace them. By helping them save time in the kitchen so that they could spare some time to do what they love.”

She further added, “It is not about celebrating one particular day, hence we deliberately stayed away from launching the campaign on women’s day. It is about looking beyond a specific day, aiming to bring about a change everyday of the year.”

Mr. Virendra Saini, Executive Director, Triton communications, “Women in today’s scenario have just forgotten to spare some free time for themselves to follow their hobbies. They have restricted themselves to a set framework which they operate in a monotonous manner. With this campaign we really wanted women to realize their potential and take time to fulfill whatever they love doing. The idea is not to eliminate or compromise on the existing responsibilities but enrich and empower by gifting them some valuable time for themselves; hence ‘#Giftoftime’.”

The campaign has been conceptualized by Sanjana Desai and Mothers’ Recipe team along with the creative agency Triton communications and is LIVE on multiple digital platforms like YouTube and Facebook. The campaign is surely expected to challenge certain existing norms and stereotypes, providing some food for thought for women to realize their dreams and celebrate themselves more often