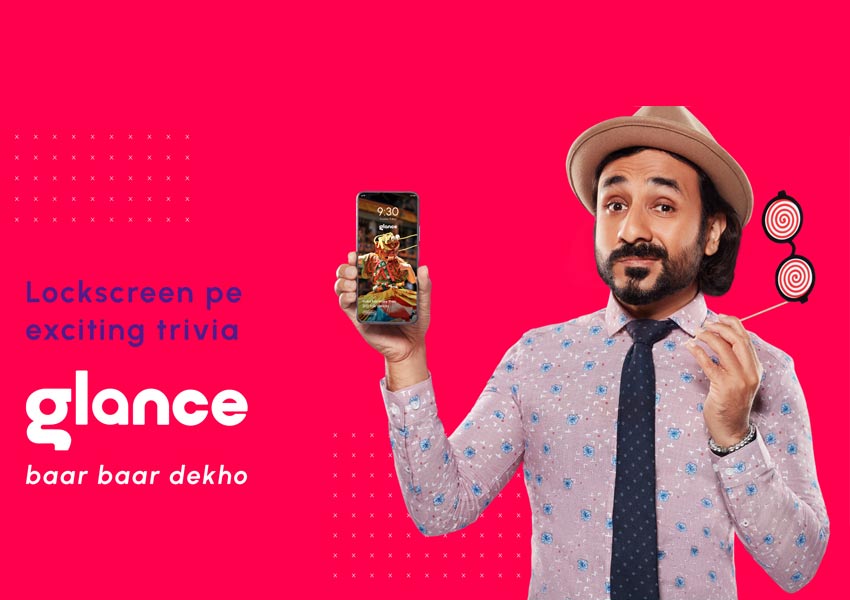 A multi-media advertising campaign “Ye Glance Hai” has been launched by screen zero platform, Glance, which provides digital content on the lock screens of smartphones. The campaign is brought alive with vibrance by DDB Mudra, communicating the exciting possibilities of content delivered on the locked screen, which is intrinsic to the brand, by several well-known names in the world of entertainment and sports.

Using familiar words and quirky representations, ‘Glance’ co-relates the light-hearted campaign, in a way that India can relate. As the tagline says “Bar Bar Dekho”, it implies us users who keep discovering more and more on our phones, which get further amplified by the lock screen of smartphones, as in this case. Different segments such as entertainment, sports and fitness have been chosen for the faces.  These faces include popular actor and model from Lucknow, Ali Fazal; globally acclaimed Indian comedian Vir Das; Telegu superstar Rana Daggubati; Tamil model and actress Trisha; versatile Bollywood actor Rajkummar Rao; one of the biggest hitters of IPL Hardik Pandya and popular television actress Hina Khan. Making it even more exciting for consumers watching, their characters mostly depict their real and reel-life personalities.

Including various OTT platforms, television and digital platforms, the ad campaign has been launched across channels to capture the minds of the new-age audience.

“We wanted to keep it pithy. We wanted to entertain. And most importantly, we wanted to leave the name ‘Glance’ in the mind of consumers. We realised that a product as rich and varied as this (Glance) needed to be experienced. So, we decided to a simple, running gag that entertains every time and just leaves enough intrigue on the table for you to check out the product,” said Vishnu Srivatsav, Creative Director – DDB Mudra Group.

Said Bikash Chowdhury, Chief of Marketing, Glance “Just within two years of its launch, Glance has already positioned itself as the leading platform for content delivery with millions of happy users who are following favourite content almost every seconds and minutes. We wanted to further amplify this, by telling them how Glance can take them to their exciting worlds of content preferences through simple and crisp stories told by their favourable stars, truly living up to “Ye Glance Hai.”

Including Bahasa, Hindi, English, Telugu and Tamil, Glance delivers AI-driven personalized content in multiple languages on the lock screen of Android smartphones. Glance is one of the largest digital consumer platforms in the world, with more than 115 million daily active users that spend 25 minutes per day. Spending 20 minutes daily consuming content across multiple genres in more than 10 languages, Glance also has access to 33 million monthly active users. As a subsidiary of InMobi Group and owner of the fast-growing video-sharing social media platform Roposo. More than 100 million times, the Roposo app has been downloaded on the Google Play Store.

In various genres such as fashion, entertainment, news, sports and other content categories, Glance delivers trending content in a rich, visual format that is easy to consume with just a tap on the lock screen. To deliver this native user experience to consumers, it leverages its strategic partnership with the world’s leading Android smartphone brands.