HE deodorant gives ‘Chutti’ to men on international men’s day! 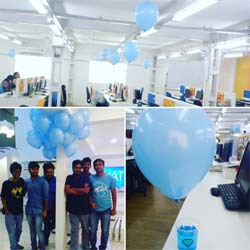 HE, the deodorant brand from the house of Emami Ltd, initiated the concept of celebrating International men’s day on 19th November last year. On the occasion, the brand published anthem #ShowMenSomeLove which went viral gaining over 500 thousand views on YouTube. This year the brand continues the campaign with a quirky video featuring women, granting men permission to do whatever they want with a campaign tagline, #TeriChutti. WATConsult, a Dentsu Aegis Network agency is the digital agency on record promoting this year’s video across digital and social channels.

This year’s video talks about a few funny habits of men like telling same old jokes, checking out waitresses, not bathing etc. but surprisingly women in the video are happily giving men permission to do all these things as it is HIS day, the international men’s day. At the end, all women in the video are wearing blue and dancing to celebrate the occasion. HE deodorant is rolling out #TeriChutti campaign as a continuation of last year’s #SoNotFair campaign. In this campaign women are freeing men from their constant nagging over men’s annoying habits. To make Men’s day celebration even more interesting the brand appeals people to wear blue and show some love to the men in their life

Commenting on the launch of the campaign, Harsh Agarwal, Director – Emami Limited, said , “Our effort is do new things always. In a category where all other brands are talking about attracting the opposite sex, we believe there is a need for a different conversation. So last year we decided to stand up for men by initiating the men’s day celebration. The platform found a lot of traction and this year we are taking it forward. Celebrating Men’s day gives us an opportunity to engage with our consumers in an innovative and effective manner.”

Speaking about the campaign, Rajiv Dingra, Founder and CEO, WATConsult, said, “I am personally very happy to work on such interesting campaign for Men’s day. Everybody at WATConsult is wearing blue today and men are getting special treatment including me. So thoughtful of team HE deodorant for initiating the celebration of Men’s day in India.”