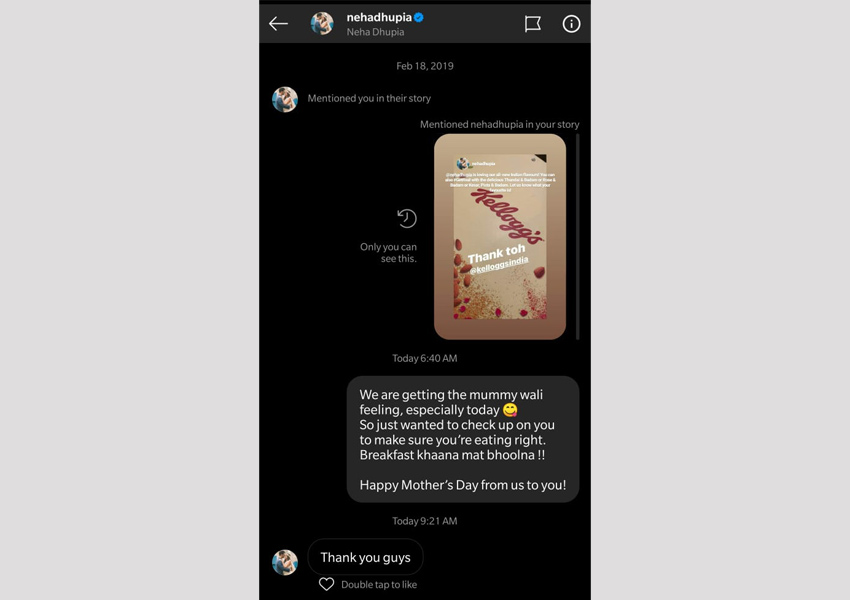 Digital Agency FoxyMoron and Influencer Agency, Pollen, two of the seven agencies at Zoo Media launched a unique Mother’s Day campaign called #MummyWaliFeeling for Kellogg’s, India’s leading breakfast cereal maker . FoxyMoron chose a unique approach for the brand and leveraged organic Instagram Direct Messages to a few celebrities, influencers and its consumers and checked in on them like all mothers do, with a caring, light-hearted message which they would wake up to.

The #MummyWaliFeeling campaign, organically connected with 700+ people via Instagram Direct Messages. This list included the Mumbai Police and bollywood celebrities like Neha Dhupia, Sameera Reddy, Malaika Arora, Kirti Kulhari and Anushka Ranjan. Chefs and popular brands in the industry such as Swiggy. Comedians like Tanmay Bhat, Ashish Chanchlani, Pranav Sapra. Influencers in various fields, like food stylists and bloggers, comedians and some followers of Kellogg’s, who interact and engage with the brand on their social media pages regularly.

The campaign received positive responses from celebrities, influencers and customers alike.  The responses ranged from expressions like “how cute”, to promises of making eating breakfast a daily ritual. The brand’s Instagram page also got a few notable followers, with influencers like Romancing the Food, Muncy Mumbai, Munchy Dessert, My Food Bite and The Great Indian Foodie, following the brand. The campaign garnered 200 engagements within a span of 5 hours with active comments flooding Kellog’s Direct Message Inbox.

Nikhil Panchal, Account Director at FoxyMoron commenting on the campaign stated “The plan was simple. With Instagram cluttered with branded content, we wanted to make the Mother’s Day campaign more human and relatable.” We scripted the message “We are getting the mummy wali feeling, especially today. So just wanted to check up on you to make sure you’re eating right. Breakfast khaana mat bhoolna!! Happy Mother’s Day from us to you!”, as we wanted people to wake up and feel a sense of motherly care with a warm check-in. We believe the success of the campaign was because it was laced with affection, it was genuine  and was low on branded quotients.”

Parikshit Vivekanand, Creative Director said “As a brand, Kellogg’s has always believed in inculcating the importance of having a positive start to the day by eating a healthy breakfast. Our creative team had a very clear approach on the tonality of messaging that needed to be executed. With clarity on communication and data analyzed insights on the precise audience that needed to be targeted we slipped into the direct message inboxes of the identified Instagram accounts. Our Campaign started as early as 7AM on Mother’s Day but it was well worth it, because of the heartwarming responses we received. We knew we had successfully melted a few hearts”

This Mother’s Day campaign is a bold move by Kellogg’s by experimenting with the trend of conversational commerce on a topical day like Mother’s Day. Additionally the #MomsMorningWisdom creatives executed on the brand’s other social media pages, left no stone unturned in ensuring Kellogg’s was noticed even by those who were not woken up to that #MummyWaliFeeling.