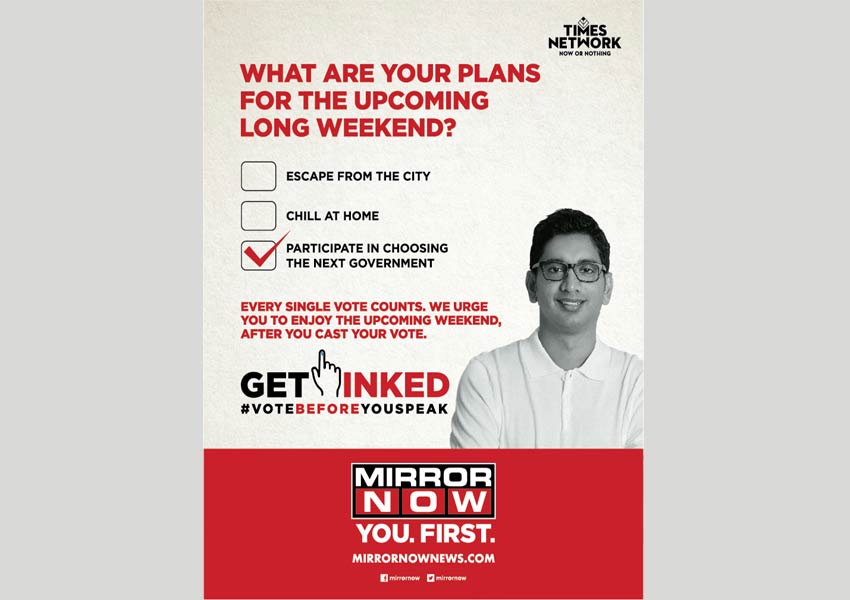 Mirror Now the channel that focuses on issues impacting people’s lives, continues to drive robust voter participation with #GetInked, an election special initiative educating the citizens on the importance of voting to assert their responsibilities as a citizen. Condemning the indifference and talked about futility of things people normally use as means of outburst and dissent and still refrain from voting, #GetInked propagates the message ‘Vote before you speak’ encouraging citizens to vote and be a part of the change they envision for the nation.

Combatting voter’s apathy, Mirror NOW’s voter awareness initiative, #GetInked comes at a time when the country prepares to make a crucial decision, where every single vote matters to select a befitting Government for the nation. Executed through a series of interactive and engaging initiatives on digital assets, the compelling campaign has created a wave of conversations and deep consideration towards voting.

As a part of #GetInked campaign, Mirror Now created a series of informative digital short films that highlights the significance of each vote featuring real-life stories and insights from 2008 Rajasthan Assembly elections and Madhya Pradesh Legislative Assembly elections in 2008, where a single vote changed the fates of the constituencies to the inspirational stories of lone voters from Hayuliang Assembly constituency & the territory of Asiatic Lions, in the Gir Forest of Gujarat.

Tags:
Previous Article
‘I would like to craft my film career around Rugby’ Rahul Bose
Next Article
RED FM bags 46 awards at the ACEF and Golden Mikes Awards