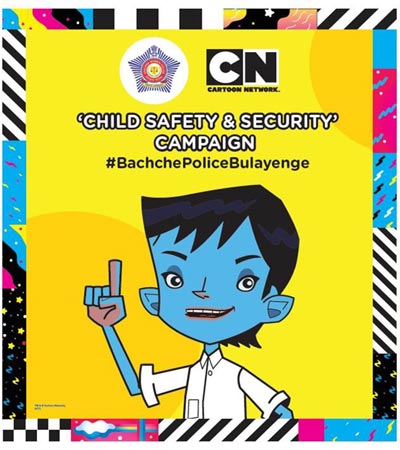 As a part of the campaign launch, two videos, featuring Cartoon Network’s popular character Kris, from Roll No. 21,educating children on traffic rules&regulations and stranger safety, wereunveiled.With security becoming analarming concern amongst parents, the campaign #BachchePoliceBulayenge aims at instilling the habit of approaching the police in case of an emergency and how can kids combat themtogether. Kriswill lead the campaign to grab the attention ofthe young audience and create awareness on:

Held at National Sports Club of India (NSCI), the event saw a turnout of over 1500 children from schools across Mumbai, who pledged to be responsible citizens. The partnership will see three more videos being released, as part of this campaign that aims to reach millions of kids at schools and recreational centres across the city. The campaign will also be leveraged jointly across social media platforms byMumbai Police and Cartoon Network and the video will be showcased at various city multiplexes.

Speaking about the campaign, Shri.Datta Padsalgikar- Commissioner of Police, Mumbai said, “In pursuit of building a safe environment for our kids, the campaign,#BachchePoliceBulayenge aims to educate and sensitise children to be aware, responsible and adhere to societal rules and regulations. We want to enable them with all the right information so they grow up to be well informed citizens and lead by example. Keeping this objective in mind, we found an ideal partner in Cartoon Network given theircommitment totheir young and impressionable viewers.”

Talking about this initiative for kids, Shri.Siddharth Jain, Managing Director – South Asia, Turner India said, “As a global media entity, Turner International believes in understanding and connecting with its young viewers.Committed to developing responsible kids’ content, Turner uses this platformto further encourage a positive change and bridge the gap between children and Policemen today. Together with Mumbai Police, #BachchePoliceBulayenge, aims to widen the outreach and accelerate our engagement with kids through our grassroot school contact programmes.”

“The Traffic Guide Project provides a platform for adults to collaborate with the Mumbai Police in managing traffic across the city, by helping implementingrules. It is a police-public partnership programme and we encourage all citizens of the age of 18 years and above to dedicate few hours in a week to decongest the city’s traffic. Every Mumbaikar can partake in this formal recognition program by Mumbai Police and help in creating a better and safer Mumbai.”Shri.Amitesh Kumar, Jt. Commissioner of Police – Traffic, Mumbai, added.

Mumbai Police, under its Traffic Guide Project initiative distributed traffic safety kits including reflective jackets, batons and whistles to the volunteers present at the event.