‘Myntra Unforgettables’ celebrates the passion for fashion through a new campaign 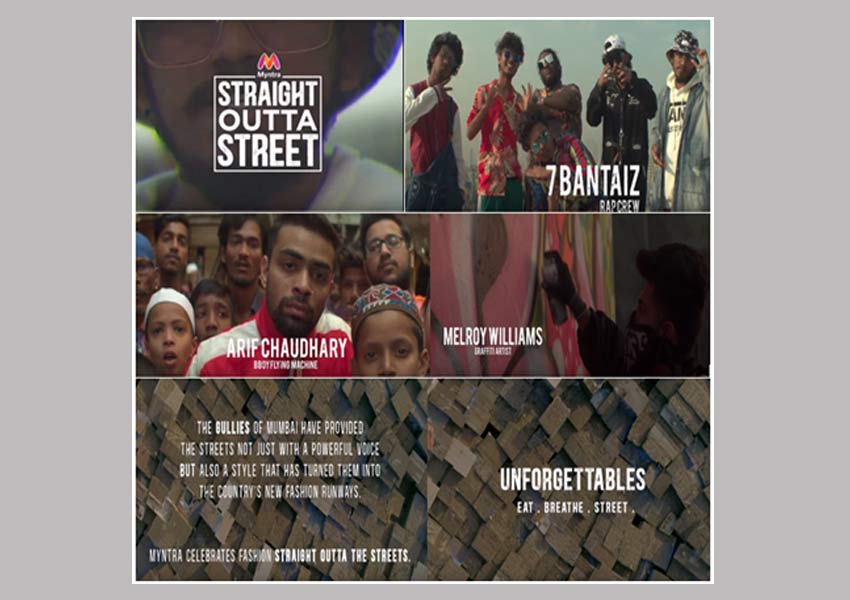 Myntra announces the launch of awide-ranging content campaign titled ‘Straight Outta Street’, aimed at enhancing its position as the powerhouse and the ultimate destination for contemporary fashion. The multi-faceted campaign on street fashion in India has just begun with the launch of a film,which is also the fifth in the Myntra Unforgettables series that highlights and celebrates people’s passion for fashion.

The campaign is focussed on contemporary street wear, a popular new phenomenon and a mind-set of many a millennial, espoused even by Bollywood, with the likes of Gully Boy. Hip-hop dancing, rap and street fashion have come together to create a new identity for teen-agers and young adults across cities and towns and Myntra has captured this new spirit through an inspiring video, shot in the heart of Mumbai.

Called, ‘Unforgettables – Eat. Breathe. Street.’ and shot at Dharavi,Jogeshwari and JP Nagar in Mumbai, the two and a half minute video has the passionate and distinguished youth of the gullies, narrating their way of life to the audience. 7Bantai’Z, the popular troupe of rappers from Dharavi share their tale of mockery from the initial days as they adopt to a new type of fashion – street fashion, however it now seems that everybody wants just that. Arif Chaudhary, a young man from Jogeshwari who is slated to represent India at a global B-boying competition, is then seen showing off his skills on the streets with a crowd admiring his talent. He goes on to state that his sense of street fashion segregates him from the rest of the ‘shirt-pant’ wearing public. He proudly flaunts his ripped denims that he customises with patches from other clothes, creating his own looks and fashion and calls it the rule of the street. The film then takes viewers to JP Nagar, where Melroy Williams, a popular graffiti artist, describes hip-hop as being street, being unique and revolting against the conventional ways of life, as he transforms a dull wall into a canvas, projecting a colourful work of art. The video conspicuously booms the essence of style, passion and culture emanating from the streets or gullies of our country and is also a tribute to the artists in the video who have shaped and made it their way of life. Overall, the story beholds the street to be the new arena of fashion.

While the first leg of the campaign focuses on the ‘Unforgettables’ video, Myntra is associating with multiple partners to drive the essence of street wear or street fashion with relevant content and activities, including a rap battle and fashion show, that are on the anvil. These activations are set to be promoted extensively on social and digital media.