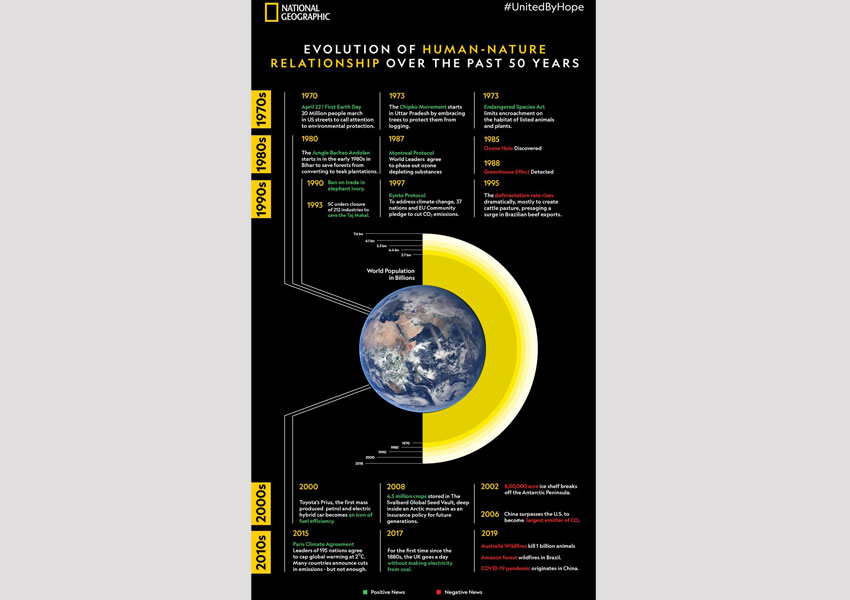 The world has undoubtedly come a long way over 50 years, since the 1st Earth Day was observed in 1970. Around that time, about half of the world population was living in extreme poverty. The average life expectancy in Africa was a mere 45.6 years. Many such challenges questioned if civilization would even last a century. National Geographic, a 132-year brand with a rich legacy of inspiring change through the power of storytelling, is taking its viewers on an optimistic journey to life on earth as part of its #UnitedByHope campaign. Despite all setbacks for Earth, the brand believes that humans will succeed in saving the planet from climate change and build a better future 50 years hence.

To create awareness around hope for a prospering planet by the 100th Earth Day in 2070, National Geographic released an infographic, which examines the Earth’s progress and the setbacks over the past 50 years. From the first mass-produced hybrid car and Paris Climate Agreement leading positive change to the Ozone Hole and Australian Wildfires wreaking havoc. Today many countries have cleaner air, water but the planet also faces a rapidly warming climate, rising extinction, and other challenges. The campaign #UnitedbyHope calls for people to have a growing sense of urgency, solidarity, optimism, and empowerment to take action to help the world rise to the challenges.

Talking about the initiative, Anuradha Aggarwal, Head – Infotainment, English and Kids, Star India, said, “Since 132 years, National Geographic has a rich legacy of inspiring audiences with authentic and visually stunning imagery to make a difference. On Earth Day, when people around the world are interconnected to demand a change, our #UnitedByHope campaign presents us an opportunity to inspire people with hope, determination, and awe for the planet. We do not know what lies ahead for planet Earth, but with the power of hope and optimism, we can certainly work for a brighter, healthier future and make the next 50 years of planet more meaningful.”

As part of its #UnitedByHope campaign, National Geographic through its four-part film series will also highlight valuable insights from experts and influencers on how unity and preventive measures are imperative in unprecedented times like these. Earth @ Home, Nat Geo India’s first ‘made at home’ documentary highlighting the fragile human-nature relationship premieres on April 22, 7 pm.