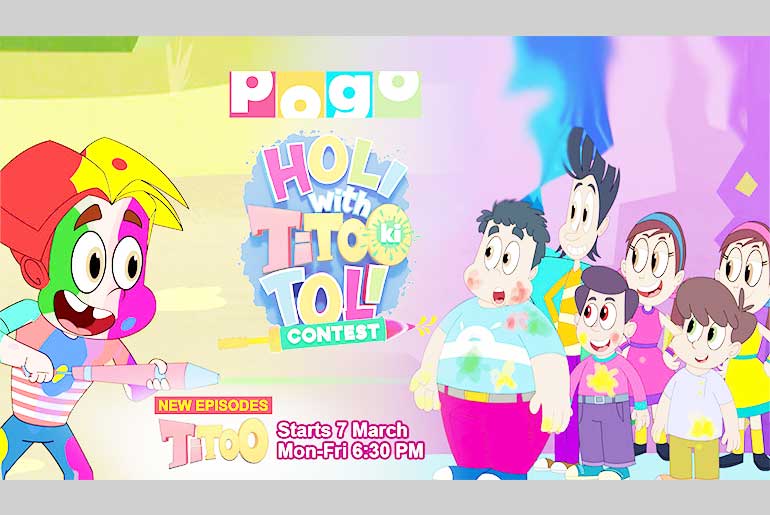 POGO, WarnerMedia’s India-only kids entertainment channel, is making Holi more colourful this year with two masti-filled weeks of fresh content and fun give-aways from Monday, March 7, 6:30 pm onwards. Kids and their families will celebrate it with a spirited ‘Holi with Titoo Ki Toli’ campaign that kicks off with Titoo entertaining them with his funny antics in their favourite homegrown comedy animation series, ‘Titoo-Har Jawaab Ka Sawaal Hu’. The brand-new episodes of Titoo will air Monday – Friday, 6:30 pm in Hindi, Tamil, and Telugu.

Until March 22, POGO’s ‘Holi with Titoo Ki Toli’ contest, powered by Alpenliebe Eclairs and with Yellow Diamond as the associate sponsor, will give its young fans a chance to win Titoo hampers filled with prizes to have a happy and safe Holi at home. POGO Holi hampers will consist of a colouring set, coloured clay, Titoo Holi T-shirts, Mugs, Caps, Titoo’s favourite food – a burger-shaped cushion, and plenty more. Kids can take part in this ‘Watch and Win’ contest by tuning in to the new episodes of Titoo on POGO and spotting the character that flashes on the screen. To participate, they must share the correct answer by giving a missed call on 9595084084.

Speaking about the contest and the celebration, Abhishek Dutta, South Asia Network Head for POGO and Cartoon Network, said, “‘Titoo- Har Jawaab Ka Sawal Hu’ has received immense love from our viewers in the last two years and is one of the most successful shows on the channel. Considering the fan following for Titoo and his friends, we are coming up with brand-new episodes of this show along with an engaging ‘Holi with Titoo ki Toli’ contest that is sure to make Holi more colourful for the young fans.”