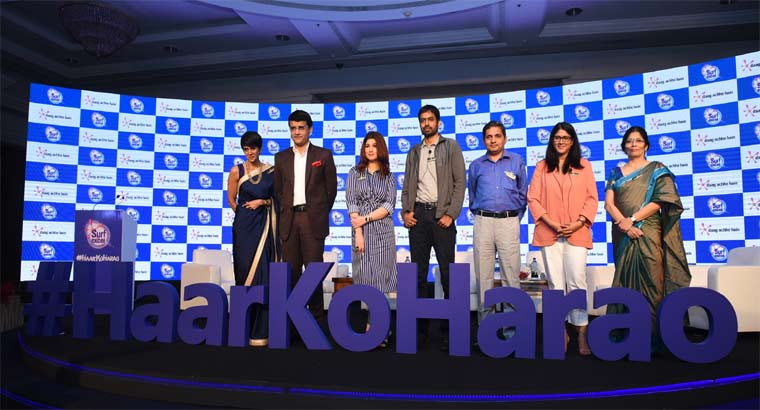 Today’s kids live in a highly competitive world where parents do everything in their ability to help them succeed in life. This constant striving for excellence is not just limited to academics but also includes a whole lot of other activities like dancing, sports, music etc. All of this leads to a pressure cooker type environment for kids where they start looking at failure as a constant judgement on their abilities. As a result of this, kids start fearing failure. The results of a recently conducted survey were quite telling and revealed that a staggering 67% of the kids feared the consequences of failure.

Parents today denounce failure, society stigmatizes failure and as a result, the kids dread failure. However, children fail as often (if not more) than they succeed. Coping with failure is a key life skill that kids need to build

With this context in mind, Surf excel kicked off its #HaarkoHarao campaign to change the perspective on failure to a learning experience.

Surf excel is India’s most loved laundry brand and has been built on over a decade of consistent advertising on “Dirt is Good”. The philosophy is that if kids get dirty while learning, then dirt is good. In its latest campaign, kids can be seen getting dirty while learning to defeat failure, aptly phrased as #HaarkoHarao.

#HaarkoHarao is the spirit of learning from failure and eventually defeating it. To kickstart the same, Surf excel hosted a launch event with inspiring stories on defeating failure from SouravGanguly, former Indian cricketer and one of the most successful Indian captains and Pullela Gopichand, former badminton player turned India’s most successful badminton coach. The event also had Twinkle Khanna, film actress and now renowned author who spoke about her perspective on failure as a parent of two kids. The event also featured MrsPreeti Kumar, Headmistress Poddar School and Dr. Harish Shetty, one of India’s most renowned Psychiatrist in the field of child development.

This was followed by a panel discussion where the panelists brought in their diverse experiences to bring forth the current societal view on failure and what it means for kids as they grow up. The discussion also had some interesting thoughts on what we can do as parents and a society at largeto change this current perspective on failure from a judgement on a kid’s abilities to an experience that kids learn from. The panelists vision of the future was a pressure free and happier environment for kids to grow up in.

Speaking on the occasion, Ms. Priya Nair, Executive Director, Home Care at Hindustan Unilever Limited said, “The #HaarKoHarao campaign is an extention of Surf excel’s decade long “Dirt is Good” philosophy. The campaign is rooted in a modern parenting challenge of helping kids cope with failure. In a society that is so achievement oriented, a lot of kids struggle when they are faced with failure. As a society, our tolerance for failure is very low. We want to change that with Surf excel and want to create a movement to change the perspective on failure to a learning experience.

We intend to reach out to parents, teachers and society at large through this campaign because the change needs to be collective to make a difference. Today’s launch is only the first step in a multi-year journey through which we will engage with millions of parents in this space. We believe that if we do so, we will create a better environment for kids to grow up in.’’

This campaign marks the next stage of Surf excel’s brand journey where the brand philosophy transcends into the real world to help address a real parenting challenge. It also is a seamless extension of the brand’s decade long “Dirt is Good” philosophy by telling parents that if kids get dirty in learning to defeat failure, then dirt is good.