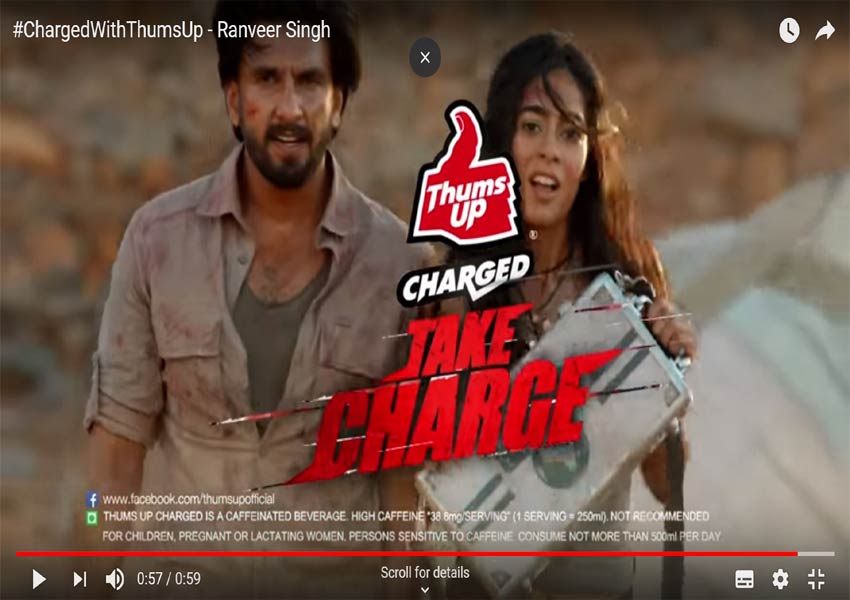 Thums Up has released an action-packed summer campaign led by its variant, Thums Up Charged. The new campaign exemplifies the uncompromising attitude and unshakeable self-belief that heroism is an opportunity in any given situation, no matter how challenging it is. For the first time, joining brand ambassadors Ranveer Singh (Hindi film) and Mahesh Babu (Telugu film) in action is model Diva Dhawan. The duo team up as investigative journalists to take charge by unleashing their potential and pushing the boundaries. Directed by renowned filmmaker Abhinay Deo, the enthralling film has been shot in a desert on the border of Namibia and South Africa.

Shrenik Dasani, Vice President – Sparkling Category, Coca-Cola India and South West Asia said, “With Thums Up Charged, our intent is to continue bringing the taste of thunder to consumers’ taste buds – as we take things a notch higher, in line with what consumers continually expect from Thums Up. This new Thums Up Charged campaign seeks to reinforce the ‘Never Give Up’ attitude, serve as a salute to the uncompromising attitude of heroes, and in the process, encourage people to challenge themselves and unleash their true potential.  We are confident that consumers will find enjoyment and inspiration in this campaign, brought to life by our heroes Ranveer Singh and Mahesh Babu.”

The film opens with an aerial shot of a plane crashed in the middle of a desert. Two investigative journalists are stranded in the desert along with secret footage secured in a box. Handing over the box to the girl, the male protagonist notices a bottle of Thums Up Charged and charges towards it. As he takes a big gulp from the bottle, his eyes light up and there is a smirk on his face as he comes up with a plan. Running towards the crashed aircraft, he lifts the wing up. The girl ties the parachute to the tail of the plane, setting it in motion. Securing the box, both get on the plane, amidst strong tail wind steering the aeroplane across the desert. The strong forces of the wind push them forward making the plane fall of the cliff. Noticing that the box has slipped away and is about to fall off the cliff, the two take a leap to catch it. The plane comes crashing down with the journalists landing safely with the footage, thereby overcoming challenges and pushing themselves to ‘Never Give Up Ever!’

Janmenjoy Mohanty, Regional Creative Officer, Lowe Lintas said, “Thums Up Charged is all set to #TakeCharge this summer. A distressed situation, secret footage at stake, and two never-say-die protagonists who steel themselves and find a way out. That’s the theme of our new film for Thums Up Charged. While this new story retains all the key ingredients of a Thums Up TV commercial, we’ve added some new elements to the mix. For one there is an action duo this time – joining Ranveer Singh and Mahesh Babu in the action is Diva Dhawan. Also, the two central people have a character role – they’re both investigative journalists.”

The campaign will be active across multiple consumer touch points like TV, Print, Outdoor and digital & social media.

Thums Up Charged is the first ever innovation under brand Thums Up which was launched to celebrate 40 years of Thums Up. The variant is the result of Coca-Cola’s steadfast commitment to innovation by offering more beverage choices to its consumers. Continuing with the same Toofani image, Thums Up Charged is packed with more thunder and stronger taste. The innovation takes the iconicity of the brand Thums Up to the next level and helps in accelerating its journey to becoming the first home-grown billion-dollar beverage brand in the Coca-Cola system.