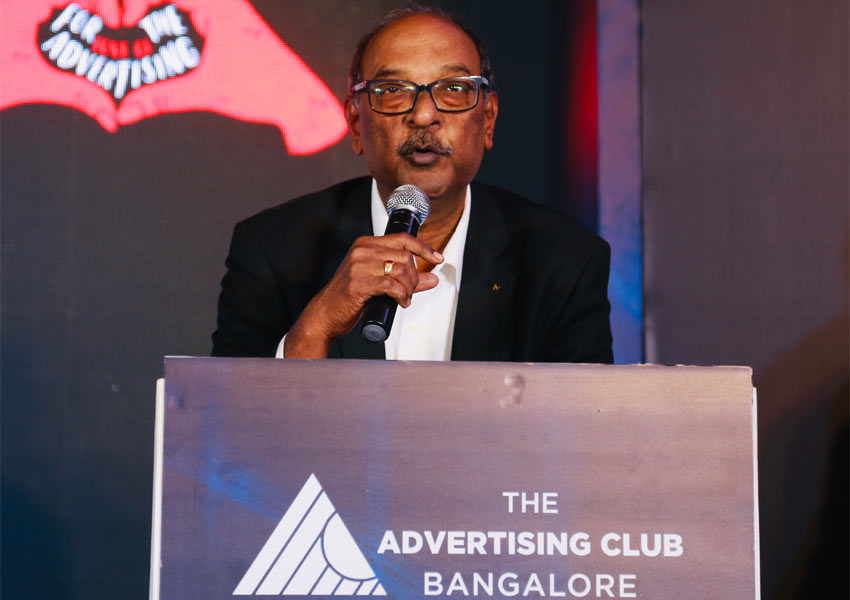 The Advertising fraternity of The Ad Club Bangalore, celebrated the life of its Executive Director Arvind Kumar. Arvind passed away on 25th of last month due cardiac arrest. There was an online meeting held by The Ad Club Bangalore. The meeting was attended by his family and friends along with several media veterans, with whom Arvind shared a long friendship.

Arvind’s life was celebrated through a short video where many industry voices shared their experiences with Arvind, about how they first met and how his cool temperament and his childlike enthusiasm and his faith in and support of the advertising industry that made him dear to so many.

Senior members of The Ad Club Bangalore and Longtime associates of Arvind– Malavika Harita of Brand Circle and RT Kumar of Oysters Advertising shared their thoughts.

Dr. T. Vinay Kumar of the Pepper Trust, Cochin,Bipin Pandit of The Ad Club, Mumbai and Anbuchezhian K of the Ad Club Madras also celebrated their collaboration with the Ad Club Bangalore through the efforts of Arvind Kumar.

Arvind’s family including Mrs Kala Arvind Kumar and Dhanya and DivyaArvind – his daughters, also attended the prayer meet. Dhanya read out an emotional poem that she has written for her father.

Managing Committee Members – Kishan Kumar of Wavemaker, Sanchayeeta Verma formerly with Group Mand Laeeq Ali of Origami Creative and currently the President of the Ad Club Bangalore shared that the Managing Committee has already started missing Arvind while putting together the Ad Club Bangalore’s biggest event of the year – The Big Bang Awards, which is going to be organised online in early December 2020.

Laeeq Ali, President, Advertising Club Bangalore, said, “It was wonderful to hear the beautiful tributes from the leading luminaries of the industry. The management committee is very touched by the kind words of everyone.Arvind Kumar is someone who has donned many hats and touched many hearts. But the most important aspect, which comes into my mind, is his ever-smiling face and selfless nature. He was a true example of a Go-Giver. He means a lot to us as well as the industry at large and we wanted to make sure his name is etched in memory forever in the form of the Arvind Kumar Memorial award for the most enterprising ad person of the year.Rest in Peace Arvind. Keep Smiling. You will be missed, a lot.”