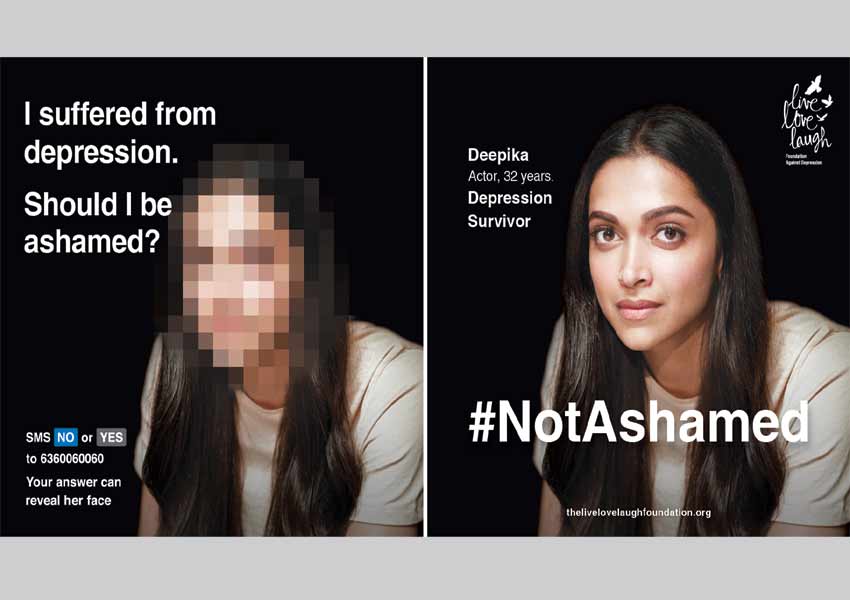 In line with its mission to spread awareness and reduce the stigma surrounding mental health, The Live Love Laugh Foundation (TLLLF) has launched a unique nationwide awareness campaign inviting survivors of mental illness to come out and share their stories.

“Starting today, I urge all survivors of mental illness to come out and share their experience using the #NotAshamed hashtag. We at TLLLF believe that this movement will only encourage and empower individuals suffering in silence to come out and seek help,” she added.

Due to this social stigma, lack of awareness and limited access to professional help, only 10-12% of people suffering from mental health problems in India seek help.

Anna Chandy, Chairperson of the Board of Trustees, The Live Love Laugh Foundation, said, “Stigma stems from a general lack of understanding about mental health. This forces people to suffer in silence and further isolate themselves. Stigma excludes all who do not fit into what is deemed as proper.

“As an advocate for mental health I am encouraging individuals from every walk of life, including doctors and mental health professionals themselves, to speak openly about their mental health and not to hesitate to ask for help. We hope #NotAshamed will be a real game changer for mental health in India and will organically unfold into a movement”, she added.

In the second stage, the survivors’ faces are revealed and they boldy declare that they are “NotAshamed,” to acknowledge their experience with mental illness.

Besides Deepika, other real-life survivors who are part of the #NotAshamed campaign include Vivek and Malvika, who are entrepreneurs; Sandhya, who is a journalist; Anovshka, who is a digital marketer; Muzzammil, who is a tailor; Anand, who is a businessman; Tara, who is a visual artist; Rindamma, a homemaker; Malavva, who owns a shop; and Thomas, who is a retiree.