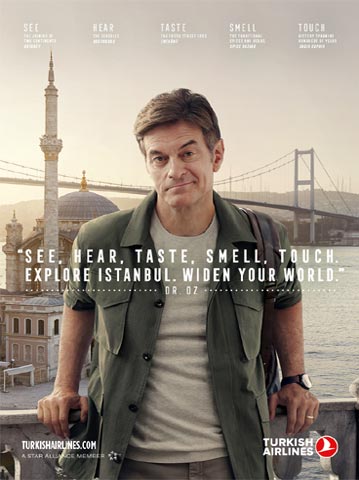 Award-winning Danish director Martin Aamund took the reins for the film, which will be broadcast in many countries, that the national flag carrier flies to, across Europe, South Africa, the Far East, the Middle East, and the Americas including North America (Canada), Latin America, and the United States.

Shooting wrapped up within a month across diverse destinations served by Turkish Airlines in Northern Europe, Africa and the Far East.

Filmed under extreme weather conditions, with temperatures up to 50° C in the Sahara Desert, and below 0° C for the Northern Lights, the commercial celebrates the magic of the human body to excel in diverse conditions. “Widen Your World” is a call to the viewer to explore the world, and through it ourselves, with our five senses.

Senses allow us to experience the world in a unique way. Touch, smell, sound, sight and taste are five magic ways of literally taking in a place and creating a moment, an experience, and a memory. Within the five senses are held some of the most precious memories, which can transport us through time. Uniquely, these grand voyages are most often inspired through the tiniest of details, whether the scent of a flower, or the taste of a spice. The Five Senses campaign encourages viewers to experience a sense of awe at the universe inside the body, as well as the amazing planet that Turkish Airlines connects us to.

Ahmet Olmuştur, Chief Marketing Officer (CMO) of Turkish Airlines commented on the new campaign’s debut at the Super Bowl; “As the airline that flies to more countries than any other, we strongly believe that our mission is so much more than bringing our passengers to their destination. We actively encourage them to discover the world and through it, discover themselves. Our new Five Senses campaign aims to emphasize the experience every journey brings towards discovering the unknown with our five senses to their fullest.

We are more than satisfied by the feedback and outcomes of our celebrity ad campaigns with world-famous figures so far. Our campaign last year ad with Morgan Freeman was a great hit. Now we are looking forward to this new cooperation with Dr. Oz. We will maintain our leadership with our ‘Widen Your World’ mission through our journey, which will inspire the whole world to seek new discoveries.”

Dr. Mehmet Oz emphasizes the importance of a high quality passenger experience; “As a doctor who has dedicated his life to communicating the wonders of the human body to the world, I am thrilled to work with Turkish Airlines on their novel Five Senses project. Together we will explore the unique experiences we can have across diverse locations around the world as we invoke curiosity and a sense of wonder for our audience.”

This follows on from the launch of a highly successful commercial starring Morgan Freeman, which aired during the commercial break at the 2017 Super Bowl and went on to become the most watched Super Bowl commercial on YouTube with 53 million views. In 2016, Turkish Airlines sponsored “Batman v Superman: Dawn of Justice”, and broadcasted its commercial as part of the sponsorship deal, at the Super Bowl for the first time with an estimated audience of over 800 million people worldwide. “Kobe vs. Messi: The Selfie Shootout”, another of the national flag-carrier’s commercial deal with Lionel Messi and Kobe Bryant, was also selected the best commercial film of the last decade by YouTube.