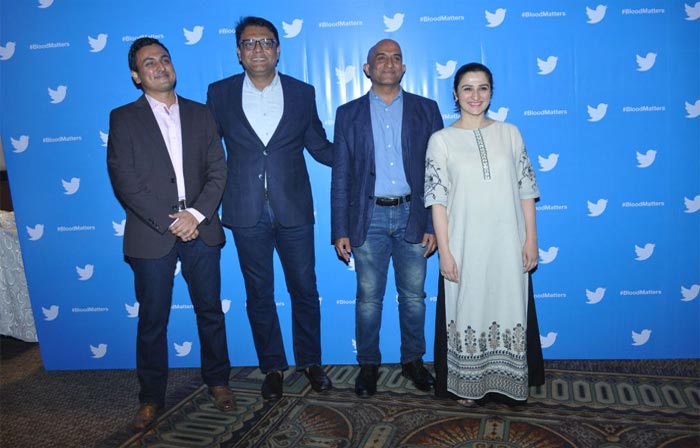 Twitter India launched a social initiative called #BloodMatters aimed at driving more awareness and bridging the gap of blood donations in India. Blood Donors India (@BloodDonorsIN), a voluntary blood donation helpline on Twitter, is the first partner for the #BloodMatters initiative. Twitter is expanding the reach of the helpline through Twitter Lite (mobile.twitter.com), which provides more data-friendly access to real-time information exchange on blood donations across India. Twitter will also promote @BloodDonorsIN as part of Twitter’s #Twitter4Good philanthropic mission.

People can request for blood donation simply with a Tweet to @BloodDonorsIN with their location hashtag, blood type, mobile contact and Twitter handle. People interested to help can follow @BloodDonorsIN and respond or retweet requests for help. Twitter will be supporting the implementation of an automated response solution to scale the operations of @BloodDonorsIN, currently run by a group of volunteers. Twitter will also amplify the real-time communication efforts of the handle with verification, promotion on Twitter, and use Twitter Lite to connect @BloodDonorsIN with people across the entire country, from the metros to rural India. Twitter Lite (mobile.twitter.com) provides a data-friendly mobile web experience accessible to anyone with a smartphone or tablet with a browser, optimized for speed with up to 30% faster launch times, reduces data usage up to 70% with data saver mode, and takes up less than 1MB on mobile devices.

With #Twitter4Good, Twitter’s mission is to make the world a better place by harnessing the positive power of Twitter. As a company, Twitter works towards this goal through civic engagement, volunteerism, and partnerships with charities around the world. #BloodMatters fits into Twitter’s overall commitment to support a broader emergency response and disaster recovery program for India. As part of the #BloodMatters initiative, Twitter seeks to work with more blood donation helplines like @BloodDonorsIN, blood banks, and health institutions across the country to connect and reach a larger audience. The platform aims to scale up the volume of blood donation conversation in India, the number of donors, and work with partners that can ensure safe, screened blood can reach those in need in time across India.

Since December 2008, Mr. Balu Nayar, founder of Blood Donors India (@BloodDonorsIN), has been running the blood donation helpline on Twitter to alleviate the matching of blood donation demand and supply in India. In the past 10 years of operation, the handle has garnered over a million followers  while the handle received over 680,000 mentions and more than  11,000 responses to blood donation request tweets in 2017. Based on 2017 data from @BloodDonorsIN, blood donation request Tweets came from over 40 cities across India with Hyderabad, Chennai, Delhi, Mumbai and Bangalore as the top 5 locations. @BloodDonorsIN volunteers help to translate requests in Hindi, Telugu, and Tamil, into English.

Balu Nayar, the founder of Blood Donors India (@BloodDonorsIN), said: “Twitter is the fastest platform where information exchange on blood donation takes place. Over the years, @BloodDonorsIN has accumulated over a million Twitter followers who have sought help, want to help or have been helped. The goal of the collaboration is to extend the benefit to a larger audience by creating more awareness for blood donation requests and scaling operations of @BloodDonorsIN through this initiative.”

J.P. Nadda, Union Minister of Health and Family Welfare – Government of India. Parliamentary Board Secretary, (@JPNadda) on the occasion of the launch of #BloodMatters said, “I am happy to see Twitter take up this cause to strengthen the overall health and well-being of the country with the #BloodMatters initiative. This will play a powerful role in mobilizing resources and strengthening the blood donation drive in India.”

Mahima Kaul, Head Public Policy, Twitter India said, “Giving back has been a priority for Twitter since its inception and we believe the open exchange of information can be a compelling force for good in the world. #BloodMatters is a step in that direction. While Twitter is prominently used during crises and disasters, blood donation demands are an example of how everyday crises are solved on Twitter. We are humbled to kickstart the initiative with @BloodDonorsIN, a handle that symbolises our mission of positively impacting the world by harnessing the real-time power of Twitter and hope to make a larger impact by extending its reach through Twitter Lite.”