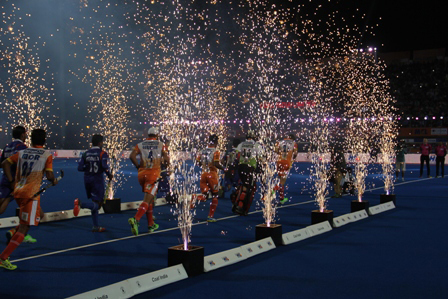 Percept Sports and Entertainment, the Strategic Business Unit of Percept One, bagged the prestigious mandate of managing and executing the integrated marketing and promotion campaign for HIL’s Kalinga Lancers. Percept Sports & Entertainment is responsible for handling the 360-degree scope of work encompassing conceptualizing, planning and executing the entire campaign for Kalinga Lancers.

To continue the momentum of last year’s popularity of Kalinga Lancers, and to make the event bigger and better in HIL 2016, PSE made the most of a diverse range of media platforms including Electronic Media, Below-the-Line activities, Social Media, Out of Home, and the overall branding of Kalinga Lancers.

Kalinga Lancers is a field hockey team based in Bhubaneswar, Odisha. This is the 3rd season of Kalinga Lancers with Hockey India League. It is jointly owned by Odisha Industrial Infrastructure Development Corporation (IDCO) and Mahanadi Coalfields Limited (MCL). Former Australian player Mark Hager is the head coach of the team while former Indian captain Dr. Dilip Tirkey is the chief mentor and advisor of the team. The Hockey India League (HIL) is an annual field hockey event in India which draws the participation of players from all hockey powerhouse Nations. A dynamic and modern brand property, it has introduced a new audience demographic to the world of sports and has dominated the media mindset over the last three years. HIL’s Season –IV commenced from January 18, 2016 and will continue up to February 21, 2016.

Percept Sports & Entertainment presented a sporting radio jingle and TV Commercial for Kalinga Lancers along with a playing contest, sharing posts, and re-tweeting on Facebook and Twitter. It further executed the on-ground activation in malls by inviting team players to the mall. Players also attracted the throng in schools by having one-on-one interactions with the kids. To create awareness, PSE cantered hoardings, banners, poles and splashed bus branding around the city.

The integrated marketing and promotion offered by PSE also comprised the service of welcoming players, player’s photo-shoot, conceptualizing and executing the newspaper ads, the launch ceremony of the jersey & mascot, ticket selling at box office and via book my show, promoting the brand via in-stadia branding and also executed the parking plan and security plan during home matches.

Commenting on the success of the event, Jaydith Debta, Manager – Operations & Marketing, Kalinga Lancers said, “The HIL event in Bhubaneswar demanded meticulous planning and attention to detail. The entire team of Percept Sports and Entertainment has boundless energy and enthusiasm. I really appreciate all the hard work & turmoil that went in to this to pull off an event of such magnitude and stature. PSE’s unending capacity to manage crises has reassured us all and I would personally recommend the services of PSE for such events.”

Commenting on the win, Jayaram Nair, National Business Head, Percept Sports and Entertainment reiterated Percept’s dedication and commitment to the sports domain and stressed on how this project added another feather to the long run and successful history of PSE executing some of the country’s most prestigious and large format sporting events.

“It’s an immense opportunity to be associated and to manage the account of the prominent team Kalinga Lancers. The mandate was won after a multi agency pitch and was a result of Percept’s thorough understanding of the 360-degree scope of integrated marketing and promotions, understanding and execution detailing that went into the pitch.”

CoinSwitch Kuber appoints HiveMinds as its Digital Agency
MediaInfoline May 11