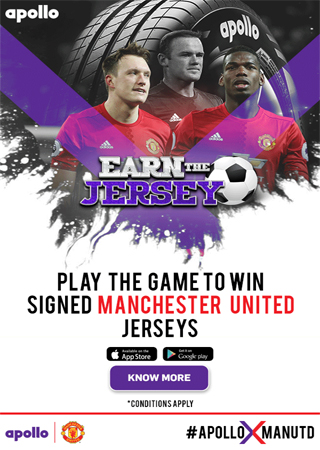 Apollo Tyres along with WATConsult, India’s leading and most awarded digital and social media agency, part of Dentsu Aegis Network, has recently launched a digital campaign called “#EarnTheJersey”, as part of their association with Manchester United.

Based on the motto, “A Manchester United Jersey is always ‘EARNED’ and never ‘GIVEN’, this initiative is part of the overarching umbrella of #ApolloXmanUtd, for the Indian market.

Along with creating brand awareness about the association amongst the Indian soccer & Manchester United fans, the key objective of the campaign is to also leverage the partnership with one of the biggest football brands to maintain the interest of Apollo Tyres consumers.

#EarnTheJersey is a trial by which a fan can truly ‘EARN’ their Manchester United Jersey by ‘Going the Distance’ and proving that they deserve it. The users are supposed to download the augmented reality (AR) app from Google play or iOS store and scan the Apollo Tyres logo to start collecting virtual Manchester United jerseys. The one who collects the maximum jerseys stands a chance to watch a live match or win a signed Manchester United Jersey.

The first season of the campaign is till August.

Speaking on the same, Rajiv Dingra, Founder and CEO, WATConsult, said, “Through this campaign we wanted to build upon the football craze in India among the Manchester United fans by giving them a chance to truly earn their jerseys.  We chose to go down the digital route by creating AR apps considering our young, tech savvy audience.”

Mr. Pramesh Arya – Group Head Marketing (APMEA), Apollo Tyres Ltd. said, “We at Apollo Tyres, believe in the power of the digital medium to connect with our consumers. We have created a strong digital presence for Apollo Tyres in the recent past. Leveraging our association with Manchester United and the power of AR technology, we want to create exciting experiences and rewards for our consumers. With this campaign, we want to graduate from search and display based awareness campaigns to creation of a brand engagement property that drives brand differentiation and loyalty.” Tags:
Previous Article
LimeRoad Offers 22 Lac style ideas for men
Next Article
Next international holiday, plan it without a visa

Next international holiday, plan it without a visa
MediaInfoline May 30