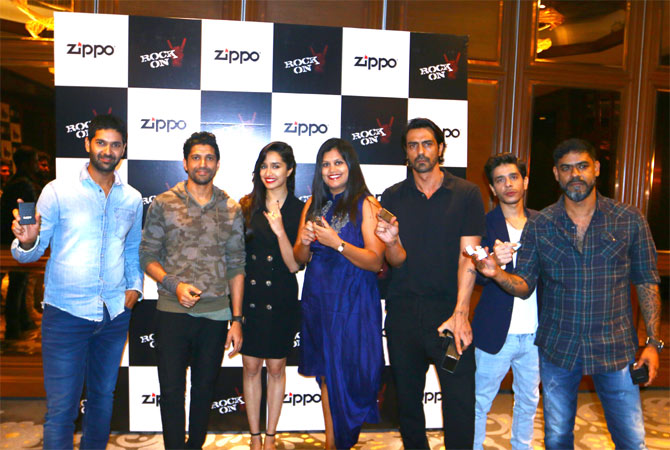 Iconic American lifestyle brand Zippo is set to raise the temperature and the tempo of cinema-goers across India this winter as it partners with Farhan Akhtar’s Rock On!! 2. The film features a leading Bollywood cast including Arjun Rampal, Purab Kohli, Shraddha Kapoor and Prachi Desai, and will launch in cinemas on November 11th 2016.

Ahead of the film’s debut, a star-studded photo call was held with the cast of the film and Mrs. Simritha Ranjan from William Penn Pvt. Ltd. (WPPL). Through the partnership, Zippo will launch a limited edition of their classic Wind Proof Lighter designed with the team from Rock On!! 2, featuring key visuals from the film.

Zippo will also be hosting a series of online competitions as a second chance for fans to get their hands on a piece of rock, film and American heritage memorabilia.

Talking about the association, Excel Entertainment, said, “We are delighted to associate with Zippo for our film Rock On!! 2. Both the brands speak the same language of friendship, love and music! It’s been an interesting journey overall.”

As well as the limited edition lighters, Zippo’s support will be credited within the Rock On!! 2 film and promoted across social, digital and traditional print media.
Commenting on the association, David Warfel, Vice President Global Marketing at Zippo Manufacturing Company, said, “Zippo is an iconic brand that has grown a global following over eight decades. We’re working hard with William Penn in India to replicate our global success in India. As such, we are thrilled to announce Zippo’s partnership with Farhan Akhtar’s musical drama Rock On!! 2. This is an ideal partnership for us, tapping in to key consumer passion points which will help to expand our footprint in India and connect with consumers through Bollywood.”

Zippo: more than a lighter

With over 80 years of history, Zippo has an influential and dedicated fan base. The brand has transcended its functional benefits to become a cultural icon and regularly features in films around the world.

The unique designs, date stamping, affordability and rich history of the Zippo lighters make them a great item to collect.  The number of collectors and lovers of Zippo lighters continues to increase daily. In the United States alone it is estimated that there are around 4 million Zippo windproof lighter collectors and there are 11 official collectors’ clubs worldwide.