Lookup, a free service that connects local businesses with consumers, is thrilled to announce the launch of @lookuplite based on Twitter’s platform for live, public conversations. Simply Tweet your requests starting from booking appointments, ordering food till enquiring about products to @lookuplite and Lookup will monitor it and send solutions within minutes.  Up until now, Lookup was launched on Android, iPhone and SMS. Through this collaboration, Lookup is just a Tweet away.

“Our idea is to make Lookup ubiquitous. Being one of the most popular social media in the world, Twitter is a real-time communications platform for us that can’t be skipped for our on-demand local commerce service,” said Deepak Ravindran, Co- founder and CEO of Lookup.

The technical integration will include a Twitter account @lookuplite to answer people’s queries. Whenever you Tweet your request, you will get a reply through a mention on Twitter. If you want to ask something in private, you can send a Direct Message to @lookuplite.

Twitter’s support in encouraging the entrepreneurial culture is rampant in the world today. There are over 320 million Twitter users in today’s world and a large number of Lookup users are also active on Twitter. With this partnership, Twitter is providing Lookup a larger social establishment. Now, ‘getting things done with a message’ is now more convenient and easily procurable.

“We are always looking to provide better accessibility for our users and to help them be more productive with Twitter. With Lookup on board, millions of Indians in Bangalore, Mumbai, Delhi NCR and Pune can now order home delivery, make reservations, book appointments, get information on store deals, and much more done, one Tweet at a time,” said Ravi Bhaskaran, Twitter’s Head of Business Development for India and South Asia. 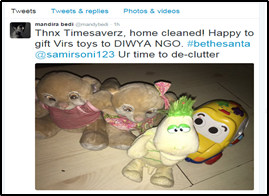