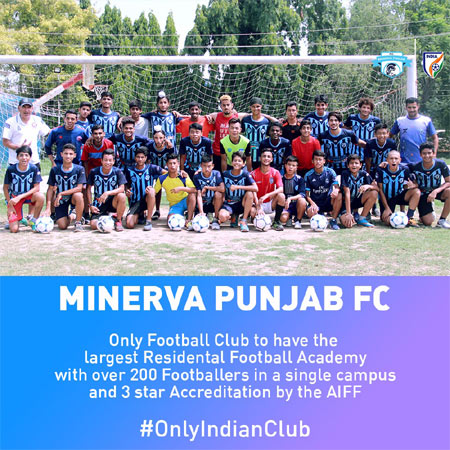 The 2017-18 I-League season is just around the corner, and the young team of Minerva Punjab FC has roped in Rooter, the world’s first sports fan engagement platform,  as its official fan engagement partner. Rooter, which is on a spree of striking deals with some of the major teams of various sports leagues such as the IPL, ISL and PKL, will look to acquire and expand the young team’s fan base, specifically in the North Indian region.

Being a multi-sport platform, Rooter will aim to expand the fan base of the football team by acquiring fans of different sports and encouraging them to follow Minerva’s I-league journey. Furthermore, in a unique deliverable for a tech platform, Rooter will provide stats and data of fan engagement for all Minerva Punjab FC matches to the team to help them grow their fan base.

Rooter will also help the team sell tickets and merchandise as well as facilitate other revenue generating opportunities. It will assist the team in acquiring sponsorships and keeping the fans engaged through in-app notifications and mails with information on the team’s progress. The app will also feature a dedicated Minerva Punjab FC Team Page on the app where it will provide stats and scores along with personalized chat forums for fans of the team to connect with each other.

Commenting on the association, Piyush, Founder and CEO, Rooter said, “Minerva Punjab FC is a young team that has shown tremendous potential and resilience. The team from Punjab represents the energy, tenacity and never-say-die spirit of northern India. Rooter aims to bring this spirit onto the digital platform and provide Minerva Punjab FC fans with an assortment of engagement and interactive opportunities, such as Rooter’s popular features including live match prediction, contests, quizzes etc. With new signings such as Japanese midfielder Toshiya Hosoe, the team looks set to achieve a miracle, and Rooter is geared up to be its trusted digital partner throughout the journey!”

Elaborating on the fan engagement process and Rooter’s role in it, Ranjit Bajaj, CEO, Minerva Punjab FC said, “Minerva Punjab FC is a brand new team of youngsters looking to make their presence felt in the top footballing contest of India. We will need all the support we can get during the league and Rooter has been roped in thanks to its unparalleled digital fan engagement credentials. Rooter’s unique features have endeared it to sports enthusiasts all across the country, and we hope to leverage its status as the definitive digital sports destination and engagement platform to expand our fan base and provide a quality experience to them!”

Rooter will be recognized as the official fan engagement partner on all advertising collaterals of the team, and will feature the app’s logo on its website. Minerva Punjab FC will also provide Rooter with imagery rights and grant tickets and merchandise to the fans on the platform. Live scores and stats API of Minerva will be integrated with the app and player interaction as well as marketing videos will be provided to Rooter for promotional purposes. With four members of its squad already selected for the Indian U-17 World Cup team, Minerva Punjab FC is a team brimming with potential. As they look to brush shoulders with some of the best footballing talent in the country, Minerva Punjab FC and Rooter will together look to achieve a unique double of lifting the trophy as well as achieving an unparalleled level of fan engagement.