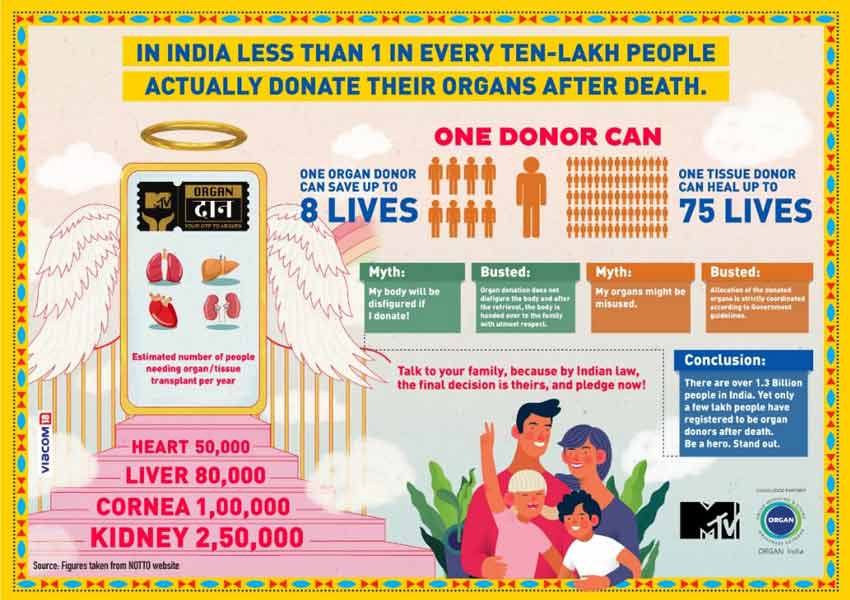 In a nation,with a population of 1.3 billion only 0.52% per million population donate their organs after death. In order to trigger a change, MTV India partners with ORGAN India. The two together launched an action-oriented campaign, MTV ORGAN Daan, which aimed at spreading awareness about organ shortage and to encourage people to donate their organs after they are gone.

Speaking about the campaign, Navin Shenoy, Head of Marketing – Youth, Music and English Entertainment, Viacom18 said, “As a brand, we’ve always believed that youth will lead change in our society. According to MTV Insight Studio’s research, 81% of young Indians have actively started supporting cause-led initiatives. So, they have started turning armchair activism into actual action. Whether it is through our brand campaigns or original programming, we believe that the soft power of media can be a catalyst to this change.” He further added, “With MTV ORGAN Daan, we aim to drive a conversation around the need for organ donation and primarily encourage youth to register as donors.”

“We are thrilled to be a part of the MTV ORGAN Daan Campaign” says Anika Parashar, Chairperson, Parashar Foundation. “We have seen the miracle of organ donation in our family. My mother, Former Chairperson, Late. Ms. Kirti Parashar, received a life-saving heart transplant that gave her 5 more years with us. It was possible only because someone donated their organs upon their death, and saved so many lives, including my mother’s, and we are truly grateful for that.” Sunayana Singh, CEO, ORGAN India said that “We have made it our mission to sensitize the public about deceased organ donation. We believe that MTV ORGAN Daan campaign is the perfect way to inspire the youth of this country to leave a legacy that spans many lives, and that too in a way that appeals to them.”

Bollywood actor Arjun Mathur who came on board to echo the need for awareness amongst masses, said “Organ Donation is a cause I feel strongly about for I have seen its impact quite closely. Despite the deluge of information available on this issue and the alarming data, there is a long road ahead till we rise up as a society and pledge to make a difference. I am glad to associate with MTV ORGAN Daan and with ORGAN India for a need of the hour initiative that aims to evoke awareness around organ donation in India and urge the youth to come forward and participate. As a part of this campaign, I am happy to catalyse this change and focus on the need for the most valuable gift of life.”