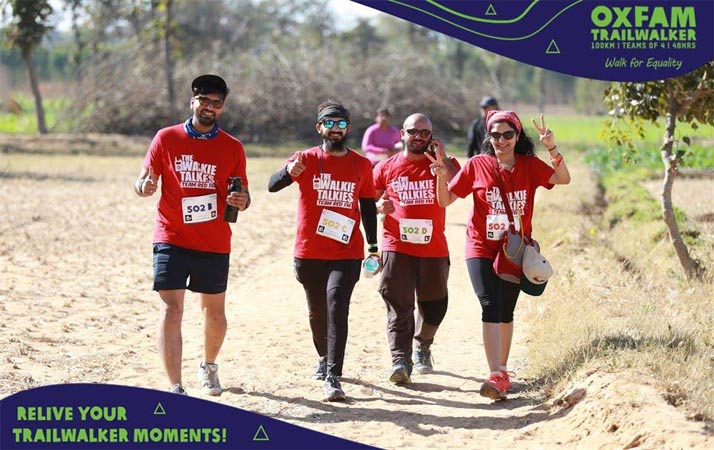 RED FM joined hands with globally recognized charitable organization Oxfam India to support equality across education, health and gender, through the all new edition of Oxfam’s ‘Trailwalker’ – A global phenomenon which was hosted in Bangalore recently. The event saw many teams of four individuals walk 100 Km in 48 hours. Proceeds from the participants will be used to fight poverty and inequality worldwide.

Trailwalker is considered as an ultimate team challenge. Teams of four walk 100km in 48 hours to make a big difference in someone’s life. Funds raised will be used by Oxfam India to reduce inequality and to bring about lasting change in peoples’ lives. Every step which was taken contributed to Health and Education, Gender Equality and Humanitarian Relief. Since 1986, over 200,000 people have taken part in Oxfam Trailwalker, collectively raising over $139 million to fight poverty and inequality worldwide.

Red FM are the official radio partners of the walk and the crowd witnessed locally popular RJ Shaayan take up this gruelling challenge. Alongside him was fitness enthusiast and actor Milind Soman who also flagged off the walk, along with several Bengalureans, striving to make a difference by completing this physically taxiing walk.

More than 350 teams with a total of nearly 1500 hundred walkers participated and donated, while supported by 1050 volunteers. The walk started from Sultanpet High School, Nandi Hills and ended at Brigade Orchard Sports Ground. The breath-taking trail gave a spectacular countryside experience! Starting from the edge of a beautiful valley in the Nandi Hills, the trail passed through more than 30 villages. Plantations of grapes, vegetables and flowers dotted the picturesque landscape. There was mild ascent and descent at various places on the trail to challenge one’s endurance, but the beautiful scenery kept the participants motivated!

Oxfam India CEO, Nisha Agrawal, had this to say, “I was excited to see thousands of men and women coming together to participate in this walk for equality and supporting Oxfam’s work. This year, a special focus is on our ‘Bano Nayi Soch’ campaign, which focusses on breaking gender stereotypes. In a country like India, where over 50 percent of women and men think that it is normal for women to be beaten by their spouses for a number of reasons, we at Oxfam are working to bring an end to this endemic problem of domestic violence. Surveys and Government reports reveal that women are abused for insignificant issues like not serving a hot meal on time or going out of the house without permission. Oxfam Trailwalker enables us to generate awareness about the cause and also provide the walkers the best 48 hours of their life.”