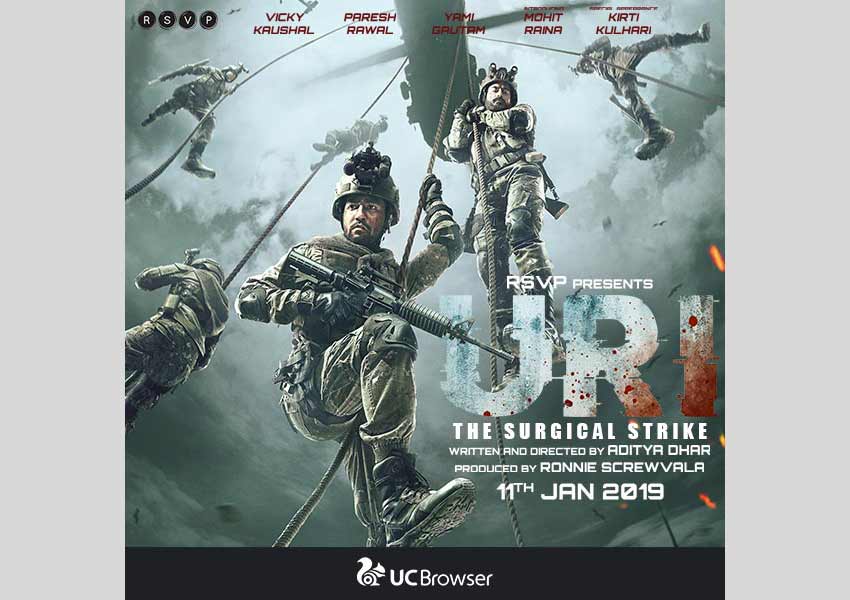 UC Browser has tied up with the production banner RSVP Movies to promote Bollywood’s latest action drama, URI: The Surgical Strike. The trailer of the movie has been trending on UC Browser and UC News since early December, with the trailer GIF garnering 15% more than average views on the UC platforms.

As a Trending Partner for RSVP Movies, UC has been sharing latest updates about the movie and its stars for its wide user base of 130 million in India. UC Browser will also host the film’s actors Vicky Kaushal and Yami Gautam on its platform for a live and fun chat session at 20:00 PM IST, January 11th. This is Yami’s second outing on the UC platforms, she earlier interacted with UC fans during the promotions of Batti Gul Meter Chalu. The actors will just not answer viewer questions but also give a peek into their personal lives and play some fun games, such as improvised performance challenge. The collaboration is part of UC’s efforts to provide specialized curated content across multiple categories for its users.

URI will see actor Vicky Kaushal donning the army uniform for the second time, after Raazi. The actor is on a run with his recent successes Sanju and Manmarziyaan and hopes to leave a deep impact on every Indian with his latest patriotic action drama.URI: The Surgical Strike is helmed by debutant director Aditya Dhar and is set to release on January 11th. The film also stars Yami Gautam, Paresh Rawal and Kirti Kulhari in lead roles.

According to Cheetah Lab and UC Media Lab Joint Report, Entertainment is the largest category in mobile content consumption for Indian users on UC’s news feed platform. Indian smartphone users spend 1.1 hours on an average on content related to entertainment every day. Recent developments of mobile screens have fundamentally impacted traditional media and entertainment industry within the Indian market, gradually changing viewing habits of people. With increasing popularity of smart devices and acceleration of network speeds, Indian users are gradually shifting from traditional media to digital media for content consumption. India’s growing middle class, a large population of millennials, increased economic growth prospects, as well as the development of digitization are some of the factors leading this trend.

As the No.1 third-party mobile browser in the world, UC Browser together with UC News aims to deliver enjoyable content and experience to millions of users. UC has successfully partnered with multiple movies including Zero, Kedarnath, Batti Gul Meter Chalu and Baazaar in the recent past.

UNWTO and CNN partner on Travel Tomorrow campaign
MediaInfoline May 27