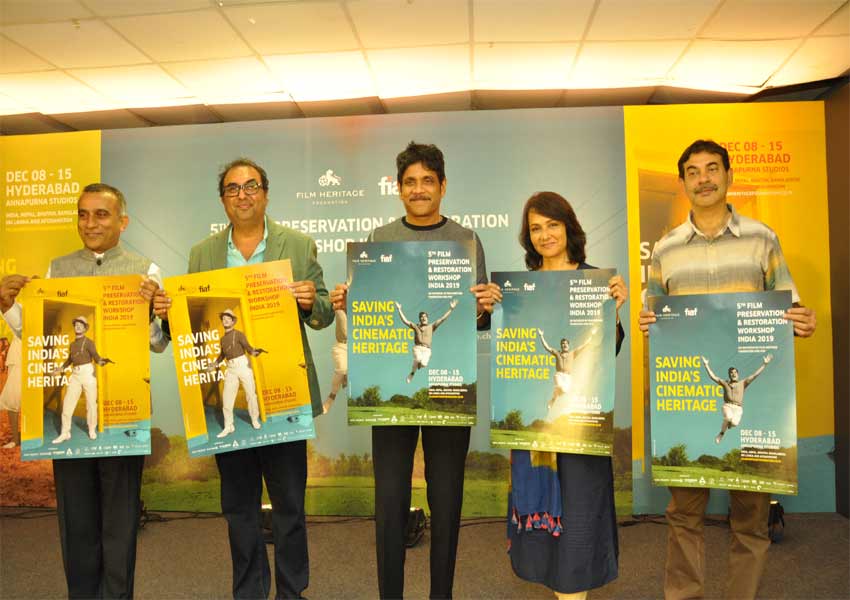 Viacom18 and Film Heritage Foundation have been partnering for 4 years now, to create awareness forthe pressing need to preserve and restore both films and film-related photographic and paper materials to future-proof our cinematic heritage through intensive training conducted through the annual week-long film preservation and restoration workshops. Over the last 4 years, the partnership has enabled these unique workshops to be conducted annually around the country, beginning from Mumbai in 2015 and then moving to Pune in 2016, Chennai in 2017 and Kolkata in 2018. Acknowledging the rich legacy of the Telugu Film Industry and the fact that Hyderabad is a hub for cinema from all over the country, Viacom18 and Film Heritage Foundation (FHF) announce the 5th Film Preservation & Restoration Workshop India 2019 (FPRWI) in Hyderabad. Esteemed actors Nagarjuna and Amala were present to announce the workshop along with Founder of Film Heritage Foundation, Shivendra Singh Dungarpur, Sudhanshu Vats, Group CEO and MD, Viacom18 and Shri. Jayesh Ranjan, Principal Secretary, Government of Telangana.

The workshop will take place in Hyderabad, India from December 8 to 15, 2019 and will have participation from India, Sri Lanka, Nepal, Bangladesh, Bhutan and for the first time from Afghanistan. Applications for the week-long workshop will be open from August 25 to October 20, 2019. Application forms can be downloaded from www.filmheritagefoundation.co.in. FPRWI 2019 will focus on the need to skill and train a resource of archivists to take on the challenge of preserving and archiving film heritage.

Speaking about the 5th edition of the Film Preservation & Restoration Workshop, Sudhanshu Vats, Group CEO and MD, Viacom18 said, “Cinema is an integral part of our country’s cultural DNA and we owe it to our future generations to pass it on.This is the reason why we have continued to partner with the Film Heritage Foundation. This time we have extended our partnership to bring our message of preservation and training in this specialized field to the Telugu Film industry that has been an integral part of Indian cinema and has given the industrya galaxy of talented directors, actors and musicians not only on a regional level but also for the Indian film industry at large. Eminent film makers like Raghupati Venkaiah Naidu, H.M. Reddy, B.N. Reddy, Akkineni Nageswara Rao, L.V. Prasad, D. Ramanaidu, Ramoji Rao and N.T. Rama Rao et al were not just revered across the world as film personalities but also shaped the discourse of socio-political culture both within and outside of India. At Viacom18, we understand and believe it’s imperative that we preserve and restore the work done by these great personalities.”

On the journey of FHF so far,  Shivendra Singh Dungarpur, Founder, Film Heritage Foundation said, “Film is an art form. It is history in motion and a reflection of the times we live in. That is why films must be saved. In keeping with Film Heritage Foundation’s mission to save every bit of India’s film heritage possible, we began conducting workshops in 2015 aimed at training individuals to preserve our celluloid heritage as well as how to tackle the challenges of digital preservation for the future.These workshops would not have been possible without the continuing support of Viacom18 and Martin Scorsese’s The Film Foundation right from 2015 and the Tata Trusts who came on board in 2017, not to mention the unstinting support of our brand ambassador Mr. Amitabh Bachchan. The Hyderabad workshop has been made possible thanks to the generosity of Nagarjuna and Amala who have offered the premises of Annapurna Studios and the Annapurna College of Film & Media to conduct the workshop. The Telugu film industry has come forward in force to support the cause including Chiranjeevi, Suresh Babu, S.S. Rajamouli, K. Vishwanath, K. Raghavendra Rao, Sowcar Janaki, B. Saroja Devi and Jamuna.

Supporting the need of restoration of film heritage, Nagarjuna, one of the most revered actors of the Telegu film industry said, “Here at Annapurna Studios we have created a museum just for the countless awards my father won in his lifetime. When you look back on the incredible films he made – “Laila Majnu”, “Devadasu”, “Missamma”, “Mayabazar”, “Batasari”, “Premabhishekham”,  it is a magnificent body of work that we must keep alive for future generations to appreciate the work of a truly legendary actor of Indian cinema. If he were alive today, he would have been very proud that Annapurna Studios have partnered with Film Heritage Foundation and the best archives around the world to educate and train future film archivists who will go forward to save India’s film heritage. I am looking forward to welcoming the participants and the international faculty of eminent film archivists to Annapurna Studios as they come together to help us save our film heritage.”

Covering every aspect of film preservation, the workshop is considered the most comprehensive of its kind in the world and has become the model for FIAF’s international training programs. The intensive week-long workshop, certified by FIAF, will cover both lectures and practical classes in the best practices of the preservation and restoration of both films and film-related paper and photographic material and will be taught by a faculty of international experts from leading institutions around the world. Classes will be followed by daily screenings of restored classics from around the world.

The 5th edition of the workshop, will have basic and advanced courses running simultaneously. The advanced courses will focus on training alumni from the earlier workshops as well as those working in museums, archives and film facilities who would like to update their skills. The basic course is targeted at less experienced individuals who would like to explore film preservation as a possible career option. Freshtopics will be introduced in the digital preservation stream like open source tools and resources, metadata, born digital and data wrangling. Practical sessions in chemical treatment of film in serious condition will also be introduced in FPRWI 2019. Additionally, practical sessions with the latest and world class ARRISCAN XT will give participants hands-on training on scanning archival film.

FPRWI 2019 will be conducted by a faculty of international experts from leading institutions around the world including:

Applications for the 2019 workshop will be open from August 25 to October 20, 2019.Selected applicants will be notified and scholarships will be presented to deserving local and international candidates.