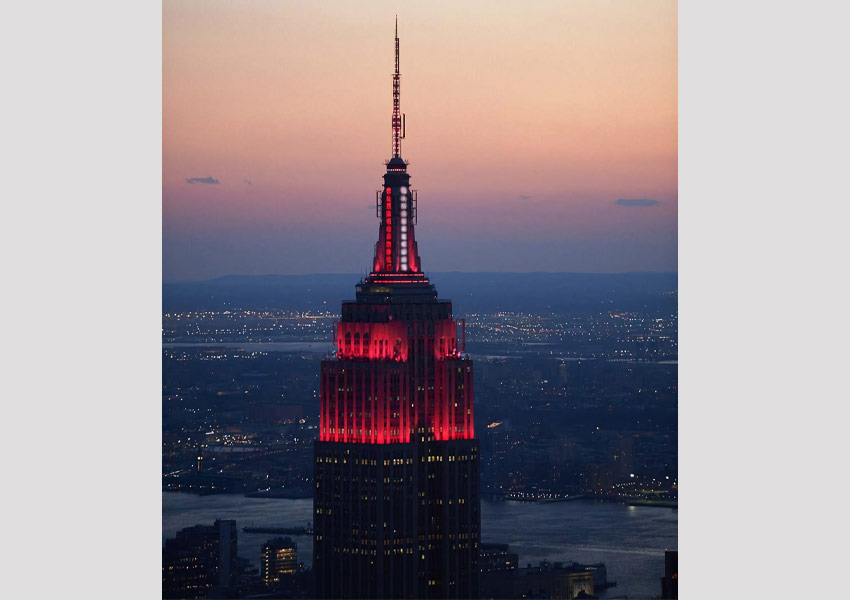 The Empire State Building (ESB) announced the launch of #HeroesShineBright, a weeklong campaign to thank every person putting their lives on the line to save others during the COVID-19 pandemic both in the United States and around the world. Every night from April 24 through May 2, ESB will dedicate its tower lights to a different First Responder organization, shining in their representative colors to acknowledge their bravery and service.

On May 2, the final night of #HeroesShineBright, ESB will partner with the World Federation of Great Towers in a coordinated lighting that will see the Burj Khalifa (UAE), CN Tower (Canada), Macau Tower (China), Busan Tower (South Korea), Willis Tower (US), Euromast (Netherlands), 360 Chicago (US), Calgary Tower (Canada), One Liberty Observation Deck (US), Ostankino TV Tower (Russia), Tallinn TV Tower (Estonia), UFO Tower (Slovakia), and others shine their lights in a red heartbeat from 8:30 – 9:30 p.m. in their local time zone to bring global awareness to those helping fight the pandemic. The Eiffel Tower will also dedicate its signature sparkle to the campaign that evening.

“The Empire State Building is the beating heart of all of us, and the international icon of the skyline of New York City.  She shines her lights to show First Responders and essential workers our appreciation, love, and support, which they deserve,” said Anthony E. Malkin, Chairman and CEO of Empire State Realty Trust. “Our tribute to the heroes on the front lines of our great city, one group at a time, will culminate with a worldwide show of support as the World Federation of Great Towers showers universal light to spotlight the contributions of First Responders around the world.”

The Empire State Building encourages fans to participate in the #HeroesShineBright campaign, and leave comments on its posts and stories across its social media platforms thanking essential workers each night of the lightings. On May 2, the Building will share a celebratory compilation video incorporating videos of personal thank yous, fan comments, and inspiring videos of the lightings across the globe.