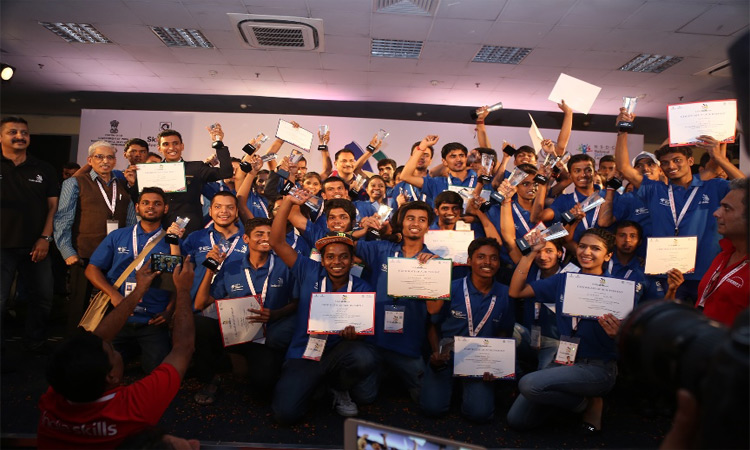 Following an intense and high spirited first edition of India Skills Competition 2016 in the country’s capital over the last three days, the closing ceremony of the largest skill based competition in the history of India, saw announcement of 24 winners in New Delhi.

The winners were felicitated by the Hon’ble Minister of State for Skill Development and Entrepreneurship (Independent Charge) and have qualified for selection of WorldSkills International Competition Abu Dhabi 2017.  Each runner up has been awarded a sum of 1 lakh rupees while the First and Second Runner up have been awarded 50,000 INR and 25000 INR respectively.

This was the first time ever that the competition of this scale has been held in the country. The competition saw more than 50,000 visitors at the India Skills Competition 2016. A young team of 192 participants in 24 skill categories represented different States this year led by, National Skill Development Corporation (NSDC) and associate organisation, under the guidance of Ministry of Skill Development and Entrepreneurship (MSDE). Students were in the age group of 18 to 22 years. Approximately 4,000 Competitors, Experts, Delegates, sponsors and partners, and supporters shared an emotional evening centred on recognizing the excellence of Competitors from around the country in the skills space.

Congratulating all the winners, Shri Rajiv Pratap Rudy, Minister of State for Skill Development and Entrepreneurship (MSDE) said “I am very proud to witness such fervour and enthusiasm between participants of IndiaSkills2016. This is our first edition of such a big scale and I am elated with the response we have from all over the country. I am certain, Team India will yet again prove it’s mettle on the global skills map at WorldSkills Abu Dhabi 2017.”

“India’s youth has a huge potential to make the country a clear leader in human resource worldwide. We have set the base for skill development and I urge all to come forward and benefit from the initiatives that we have launched,” he further added.

Speaking on the occasion, Shri Rohit Nandan, Secretary, MSDE said, “It has been an enriching experience for us to see the participants compete with each other like world class skilled competitors with such zest and passion. It has been an exhibition of pure passion and competence and it’s a huge moment of pride for us to award these 24 winners. It has been a great show from all our stakeholders in the skill ecosystem.”

Close to 4820 candidates registered to participate in the competition this year. Around 40 organisation like Mahindra, Tata, Maruti, Toyota, CII, FICCI, NASSCOM, CREDAI, NID, NIFT, came together to make IndiaSkills a success (including consortium partners). The Sector Skill Councils ensured standards aligned to National Skill Qualification Framework were followed in the competition to monitor the quality and standards of the competition which will be important to follow to compete at a world scale.

The shortlisted candidates from these events qualify for the final selection for WorldSkills International Competition at Abu Dhabi, 2017. It is a platform that has brought youth, industries, and educators together and provide youth an opportunity to compete, experience, and learn how to become the best in the skill of their choice.

At the last event organized at Sao Paolo, Brazil, in August 2015, a team of 29 candidates (all below 23 years of age) participated in 27 skills and won 8 medallions of excellence.