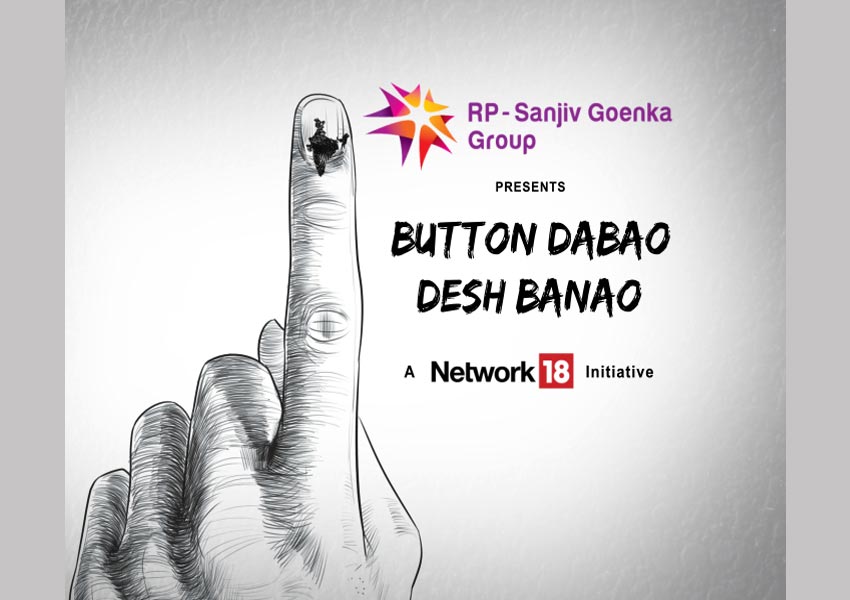 Network18 launched the initiative, ‘Button Dabao, Desh Banao’. As the country prepares itself for yet another landmark election, the campaign encourages all Indian nationals to make an informed decision and exercise their fundamental right to vote in the 2019 Lok Sabha polls.

While it may take only a button to elect a government representative, a lot of people shy away from this responsibility. With the previous General Election in 2014 earning the distinction of recording the highest voter turnout ever at 66.4%, the ‘Button Dabao, Desh Banao’ campaign is a call-to-action campaign shedding light on how each vote counts.

Speaking about the campaign, Priyanka Kaul, President – Marketing, Network18 said, “Little actions can make a big difference. Voting is one such activity, for it shapes us and our country’s future. ‘Button Dabao, Desh Banao’ is a simple campaign with which we hope to encourage Indians to exercise their fundamental right to vote. Through various digital and offline platforms, Network18 will amplify its voice by calling out to the citizens of this country to build a better India together.”

In a recent conversation regarding the importance of voting and in support of the upcoming ‘Button Dabao, Desh Banao’ campaign by Network18, Shri Narendra Modi, Prime Minister of India said, “I urge all voters come out and cast their vote early in the morning. Pehle matdaan, baad me jalpaan (vote first, then breakfast). Voters today are very aware. There are long queues at booths. Urge voters to carry water to drink. I would like to urge peaceful polling and a heavy turnout. I would like to specially reach out to first time voters, people born in the 21st century. New voters deserve a special respect and a place of pride, for the first time they are about to cast their vote on national issues and be a party to the nation’s development. I urge first time voters to definitely come out and vote. Let’s also verify our names in the voters’ list online in advance. Let all voters to be part of this great election festival. Let democracy be eternal. Let’s move forward with this mission.”

The ‘Button Dabao, Desh Banao’ campaign will be a 360-degree endeavour, extending its reach across the nation via Network 18’s extensive television and digital network along with social media, print and OOH elements.