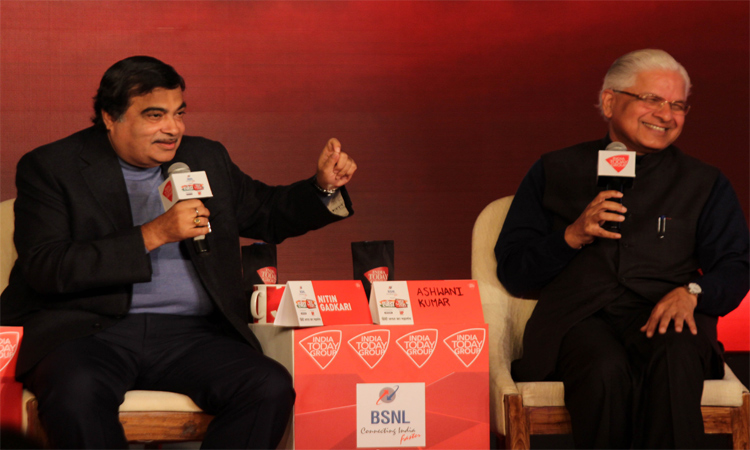 Taking potshots at the opposition parties, Shipping, Road Transport and Highways Minister Nitin Gadkari while speaking Aaj Tak’s “Agenda” programmeon Friday, said they were trying to portray Prime Minister Manmohan Singh as “villian” to fulfill their political aspirations. He also criticised Congress Vice-President Rahul Gandhi for his remarks where he accused PMO for “pressurizing” the judiciary in the National Herald case.

“Opposition parties are trying to demean Narendra Modi just to serve their political interests…Without any discrimination, Mr. Modi is working for all sections of the society. But Congress is targeting the Prime Minister just to pursue its policy of appeasement. While Mr. Modi is working hard to build India’s image, Congress’ stand is lowering self-esteem of Indians in India as well as abroad,” Mr. Gadkari said.

He further said BJP was unnecessarily being targeted for incidents like Dadri despite the fact that it was not in power in those states. “Since we came to power we not taken a single decision which was against any community or religion. Mr. Modi is working to make life better of all Indians and I urge all political parties to cooperate with us in pursing policies of progress and development.”

Referring to the National Herald case, Mr. Gadkari said it was wrong on part of Rahul Gandhi to target the judiciary and making it a case to disrupt functioning of Parliament. “Court has issued certain directions and Congress is free to take legal recourse. There is no case of vendetta and the Congress should understand it and allow Parliament to function. The Centre assures of all support and cooperation to the opposition parties and it was in the larger interest of the country and poor sections of the society that key legislations that are stuck in Parliament should pass at the earliest.”

Talking about pollution in Delhi, Mr. Gadkari said his ministry was initiated several measures to let smooth flow of traffic. “In last six months I have taken several decisions and initiated several measures that will lead to better road transport in Delhi. Similarly, I have been taking several steps that will improve highways and change transport system in the country.”

Countering his charges, Congress MP Ashwani Kumar said the Bihar debacle shows that people has voted against intolerance being pursued by the BJP. The Congress was committed to let Parliament function but they cannot compromise on the issue of free speech and vendetta politics. “Our protests show angst of the people on the streets be it the issue of tolerance or price rise…We will continue to protest for the interest of the people,” he said and accused the BJP-led NDA government of pursuing all policies of previous Congress-led UPA Government. He also said the Congress would fight the National Herald case in the courts and fail all designs of the BJP to malign Congress President Sonia Gandhi and Vice-President Rahul Gandhi. He also accused Mr. Modi of following RSS agenda, a charge which was strongly refuted by Mr. Gadkari.

Choosing the Right Color for Your Windows and Doors Brampton