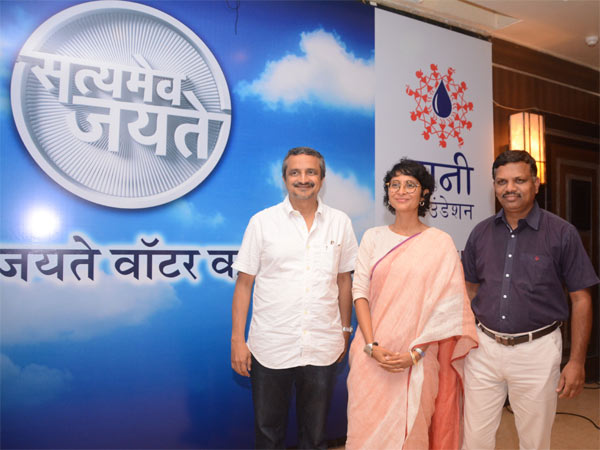 Each year, drought afflicts thousands of villages in Maharashtra. In 2015, the situation was so grim that the government had to provide drinking water through the railways to several villages.

In early 2016, a not-for-profit company called Paani Foundation was set up by Aamir Khan and Kiran Rao to work towards creating a drought-free Maharashtra. The Foundation is run by the core team members of the Satyamev Jayate TV show. The key difference in Paani Foundation’s approach is its belief that the only solution for the existing water crisis is a people’s movement. If people are convinced, motivated and trained, the Foundation believes that they themselves will have the power and ability to solve their water problems.

With this in mind, Paani Foundation has designed a training programme to teachpeople the science of watershed management and to develop their leadership skills. To bring people together and encourage them to apply their learnings from the training, the Foundation also organises the Satyamev Jayate Water Cup competition annually. The Satyamev Jayate Water Cup is essentially a competition between villages to see which village can do the maximum water conservation work in the period of the competition. Every village in the selected talukas is eligible to participate.

In 2016, the 3 talukas of Ambajogai, Koregaon and Warudwere chosen to participate in the competition.116 villages from these talukas took part, and through mass voluntary work or Shramdan done in the searing heat of April and May, an annual water storage capacity of 1,368 crore litres of water was created in just 45 days. Velu village from Koregaon taluka in Satara district received the first prize of Rs. 50 lakhs from the Honourable Chief Minister of Maharashtra, Shri. Devendra Fadnavis at a grand awards ceremony held in Mumbai last year. A documentary film titled ‘The Battle against Drought’ chronicles the journey of Water Cup 2016 and was released at the awards ceremony. The information of the journey of Paani foundation & Satyamev Jayate Water Cup was shared by Mr. Satyajit Bhatkal, CEO, Paani Foundation at a press conference held in Pune. Dr. Avinash Pol, Project Director, Paani Foundation & Ms. Kiran Rao, Founder, Paani Foundation were also present on the occasion.

The success of the pilot edition of the Satyamev Jayate Water Cup 2016 encouraged the Paani Foundation team to scale up its efforts from 3 to 30 talukas in 2017. Over 1,300 villages took part in the competition this year and between 8th April and 22nd May lakhs of villagers came together to do outstanding water conservation work. To pay tribute to these Water Heroes and honour the winners, Paani Foundation will present the Satyamev Jayate.

The Chief Guest for the event is the Honourable Chief Minister of Maharashtra, Shri. Devendra Fadnavis. Aamir Khan, the co-founder of Paani Foundation and several leading lights from the field of business and arts will be present to salute these villagers.The top three villages will get a cash prize of Rs. 50 lakhs, Rs. 30 lakhs and Rs. 20 lakhs respectively. In addition, the top village from each taluka will get a cash prize of Rs. 10 lakhs. Please do join us as we celebrate the villagers’ achievements, and be a part of this journey to make our state water-abundant.

List of 30 Talukas from 13 Districts where Satyamev Jayate Water Cup 2017 was organised: