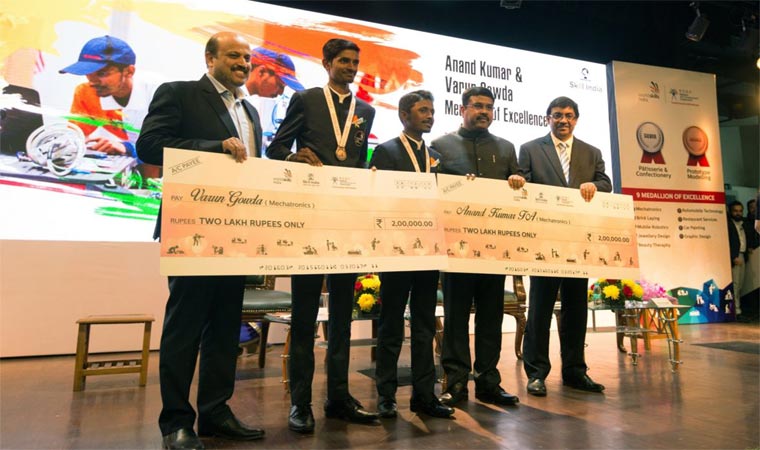 Committed to the vision of Skill India designed by the Government of India, the Ministry of Human Resource & Development (MHRD) & National Skills Development Corporation (NSDC) recently felicitated the medal winners of the 44th World Skills Competition held at Abu Dhabi earlier this year. Mr. Kiran, employee of Toyota Kirloskar Motor (TKM)   bagging the bronze medal in the Prototype Modelling Skill, Mr. H Varun and Mr. T A Anand Kumar who are also alumni of TTTI and employees of TKM, ranking sixth in the Mechatronics Skill category were recognized for their success among other achievers.

Also called as the ‘Skill Olympics’, the World Skills Competition is one of the most coveted platform recognizing excellence in vocational education and skills globally. This year, the competition witnessed more than 1,300 participants from 59 countries challenging each other in 51 skill categories. India took part in 26 categories winning 2 Medals (silver in patisserie and bronze in prototype) and 9 Medallions of excellence in the respective categories. The team which consisted of 28 talented young minds showcased the best ever performance by India since the country began to take part in the competition since 2007. The participants were selected through a nationwide screening process under the guidance of National Skill Development Corporation (NSDC).

Speaking on his achievement, Mr. Kiran said, “An opportunity to participate in the world’s biggest skill contest and being one amongst the top three is indeed life changing. I extend my sincere gratitude to all my mentors at Toyota Kirloskar Motor for recognizing the potential in me and giving me necessary guidance to hone my skills. I am also thankful to the Ministry of Skill Development & Entrepreneurship [MSDE] & National Skills Development Corporation (NSDC), for acknowledging all our efforts and encouraging us to compete at a Global platform.”

As a part of its commitment for TKM towards developing world class skilled workforce for the emerging Indian Auto Industry, Toyota in 2007 established the Toyota Technical Training Institute (TTTI) which offers a three year rigorous full-time training in – Automobile Assembly, Automobile Paint, Automobile Weld and Mechatronics (a combination of mechanical and industrial electronics) to financially challenged students hailing from Below Poverty Line (BPL) families across regions of Karnataka state. This institute exclusively emphasizes on the overall development of the trainees, as per industry requirements, by “Perfecting People” and thereby contributing through developed young multi-skilled, energetic, ideal students to the nation. TTTI’s training curriculum is a unique blend which focuses on the holistic development of Knowledge (16%), Skill (34%), Body and Mind (50%) of the students. Last year Toyota’s TTTI accomplished a key milestone of being selected for “Manufacturing Skill Transfer Promotion Programme” under the MoU signed by Ministry of Economy, Trade and Industry, Government of Japan (METI) and Ministry of Skill Development and Entrepreneurship Government of India (MSDE).