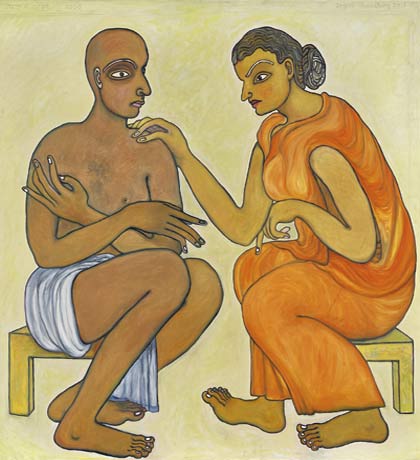 Artworks by eminent artists such as Tyeb Mehta, VS Gaitonde, ManjitBawa, Jogen Chowdhury, SH Raza amongst others are set to come under the hammer during Astaguru ‘Modern & Contemporary Indian art auction’. The upcoming auction held by the Mumbai based boutique online auction house, is slated to take place on August 22nd and 23rd, 2017.

The impactful catalogue features Ganesh Pyne’s work from the year 1980 titled ‘The Door, The Windows’. Arguably the artist’s most symbolic work, this is the first time this work has been part of an auction. Tyeb Mehta’s oil on canvas work from the year 1984 perfectly illustrates his fragmented vision and justifies the command his artworks preside. V S Gaitonde’s ‘Non – Representational’ investigations stirs the viewer’s cognizance. Jogen Chowdhury’s pentaptych work titled ‘Story of Woman’ spans across 5 panels and is his largest work executed till date. S H Raza’s landscape work titled ‘Paysage Corse’ from 1958is one of his last landscape works where he depicted a coherent architectural structure. It signifies the transition period when he turned to expressionism. Krishen Khanna’s work from 1978 titled ‘Doubting Thomas With Jesus’ is his first creation as a part of his ‘Doubting Thomas’ series.The ManjitBawa creation is splendid in presence and is composed with the doyen’s trademark colour palette and tranquil animal iconography.

The auction allows enthusiasts worldwide to participate in this highly anticipated event which is touted to be a major art affair. Astaguru conducts auctions solely online and their catalogue is now live on their website.