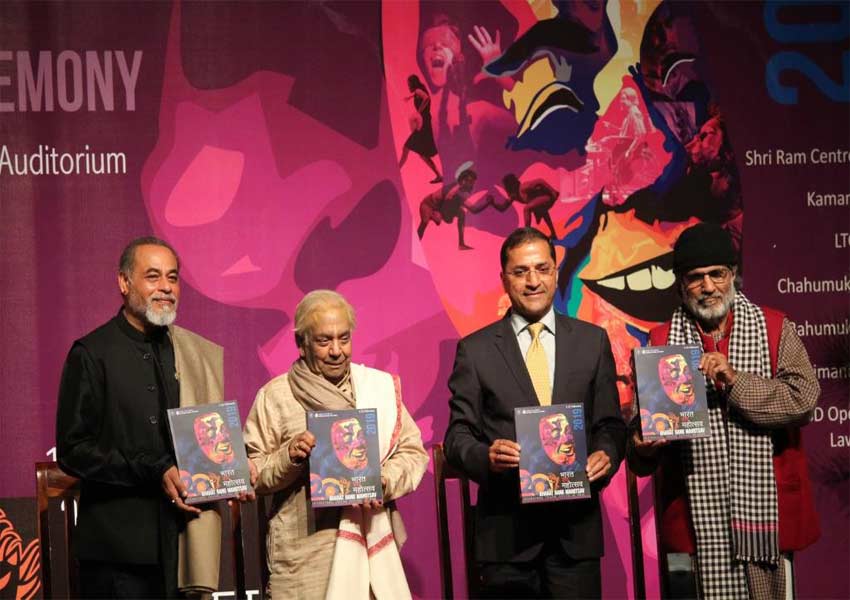 20th Bharat Rang Mahotsav, the international theatre festival of India organized by the National School of Drama (NSD), drew to a colourful culmination here today with a pledge to come back next year with a more diverse repertoire.

The closing ceremony was held at Kamani Auditorium where renowned Kathak maestro, Guru, Choreographer, and poet, Padma Vibhushan Pt. Birju Maharaj was the Chief Guest and Shri Arun Goel, Secretary, Ministry of Culture was the Guest of Honour.

Dr. Arjun Deo Charan, Acting Chairman, NSD Society presided over the ceremony. Shri Suresh Sharma, Director In-Charge, National School of Drama, welcomed the chief guest and the guest of honour. A book on the collection of plays staged during the 20th BRM was released on this occasion. Token of thanks was presented by Shri Abdul Latif Khatana, Associate Professor, Acting and Chief, Sanskaar Rang Toli.

The closing ceremony was followed by ‘Dhumrapaan’, a bilingual play directed by Shri Akarsh Khurana and performed by the group D for Drama from Mumbai. The play is a comedy that takes a dig at the stressful corporate life and the toll it takes on the health of an individual.

Padma Vibhushan Pt. Birju Maharaj says, “It is important that we spread love and happiness. Much like the art, we need people who appreciate art. I have a very close relationship with National School of Drama and I’m very happy to come here today. I take this opportunity to extend my invitation to all of you for 23rd February, the day on which we are going to inaugurate the new building of Kalashram in Delhi.”

“I compliment NSD for this very successful organization of this festival in Delhi and 5 other cities. Theatre has a great potential to contribute to the GDP and create employment opportunities, especially for the youth. The Ministry is ready to provide platforms for discussions on addressing the economic plight of theatre artists and create technology platform to facilitate mapping of audience and electronic booking, among other things,” says Shri Arun Goel, Secretary, Ministry of Culture.

“I thank Pt. Birju Maharaj and Shri Arun Goel for taking out time from their busy schedule and come here today. As we end this year’s festival today, I am sure that the audience has enjoyed the plays staged, appreciated them and thought over them afterwards. This festival is a step forward and we are sure that you will keep on patronizing us in future,” says Dr. Arjun Deo Charan, Acting Chairman, NSD Society.

“About 2000 young theatre enthusiasts from colleges in and around Delhi participated in this year’s BRM and presented around 60 short plays. This is rather encouraging since young people have the appetite for risk and hence, give us hope to see new creative ventures. Besides, this year’s BRM presented a wide variety of plays in diverse language and forms. We had plays in several Indian languages as well as folk plays, and also organized allied activities. I welcome your suggestions and feedback that may help improve the quality of the festival in coming days,” says Shri Suresh Sharma, Director In-Charge, National School of Drama (NSD).

The 20th BRM offered 111 national and international plays including folk and other traditional theatre forms, invitee plays, and productions by the students of the National School of Drama, one of the prominent training institutions in the world.

20th Bharat Rang Mahotsav, the International Theatre Festival of India, is Back