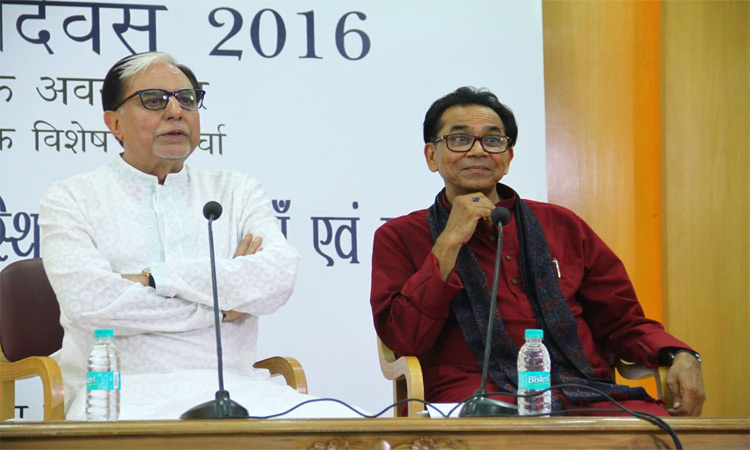 Today on the occasion of Hindi Diwas, Member of Parliament, Rajya Sabha and Chairman, Essel Group, Dr. Subhash Chandra engaged in a thought-provoking discussion with eminent Hindi Poet and renowned scholar, Shri Ashok Chakradhar on the ‘Present Status of Hindi: Challenges and Solutions’ at the Sahitya Akademi in New Delhi. Further commemorating Hindi Diwas, the Hindi edition of Dr. Chandra’s autobiography ‘The Z Factor – My Journey as the Wrong Man at the Right Time’ was launched by Nobel Peace Prize recipient and Chief Guest, Shri Kailash Satyarthi.

During the engaging discussion, Dr. Subhash Chandra spoke on the importance of Hindi saying, “English cannot replace Hindi as the language of communication in this country. In India, the language of the common man is Hindi and will continue to remain so. Over the years, by adopting words from various languages, the Hindi language has become rich and is growing on its own strength. Today, Hindi is spoken and understood all over the globe.”

“If our higher education system is imparted in Hindi or the mother tongue, we can create more experts in every field. For example, in Ludhiana, there are uneducated but skilled workers, who if they were given education, would do even better,” Dr. Chandra further added.

Adding his valuable inputs during the discussion, eminent Hindi Poet and renowned scholar, Shri Ashok Chakradhar said, “It is not correct to say that we are serving the Hindi language, rather we should be saying that we are working for the Hindi language. Hindi has reached its highest levels and in coming years, it will continue to grow even further. To keep the purity of this beautiful language, scholars from the literature community should be mindful of not misusing Hindi words or using English words deliberately. However, for the common people, rather than using pure Hindi, we should use communicative Hindi, which can be understood by people of all languages.”

While unveiling the Hindi edition of ‘The Z Factor – My Journey as the Wrong Man at the Right Time’, Nobel Peace Prize recipient, Shri Kailash Satyarthi said, “The mother tongue of a person is the most respected and no other language can take it away. Hindi and English are separate languages which are not competing with each other. However, to leave one’s own mother tongue and speak disrespectfully about it, is a shameful act. We should be open to learning all languages but should not criticise our own mother tongue. I remember when I went to receive the Nobel Prize, I deliberately spoke in Hindi and in fact, started with a Vedic Shloka which I then translated into Hindi. This was because it was the first time that my country was receiving such an honour and speaking on that stage in my mother tongue, was a proud moment for me.”

The Hindi edition of Dr. Subhash Chandra’s autobiography ‘The Z Factor – My Journey as the Wrong Man at the Right Time’ is available for order on Flipkart and Amazon India.

IT WAS 14 DECEMBER 1991 when Ashok Kurien of Ambience ad agency and I reached Star TV’s office in Hong Kong. There were ten to twelve senior and junior executives in the room. Richard Li, head of Star TV, was not there. So we waited awhile. It was like waiting for the king to come in and give his blessings.

Richard walked in suddenly and sat opposite me. ‘OK, Indian channel… Hindi channel. Where is the money in India?’ Richard was very dismissive. ‘I am not interested in a joint venture.’

Most of us in the room, including his executives, were shocked. It appeared that Richard had already made up his mind about the futility of the project.

So I addressed him directly. ‘Mr Li, if you are not interested in the joint venture, can you consider leasing the [satellite] transponder to us?’

‘There is no transponder available for less than $5 million per year,’ Richard said. It was a haughty statement to put me off.

‘That is fine. I will pay $5 million!’ It was a spur-of-the-moment decision. I did not realize the implication of what I had said…