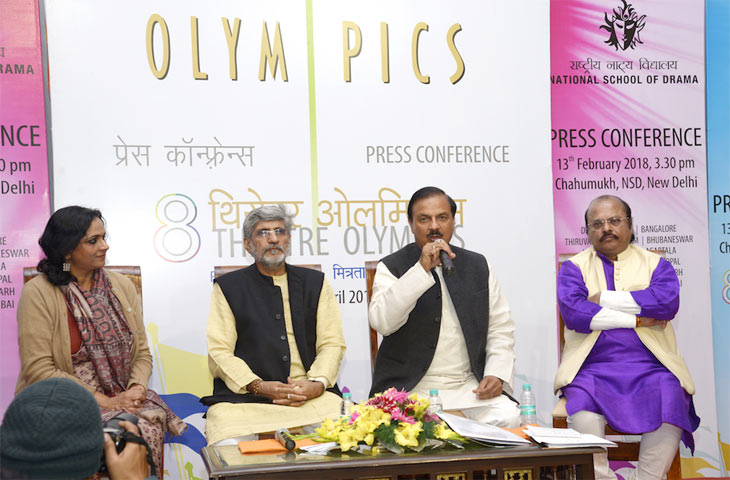 Theatre lovers in India have a reason to rejoice! The country is set to host the largest international theatre festival – the 8th Theatre Olympics – for the first time, with participation from 30 countries in a series of performances to be held across India.

The 51-day-long event will be inaugurated at the majestic Red Fort on 17th February, 2018 at 6:30 PM by Honourable Vice President of India Shri Venkaiah Naidu. The 8th Theatre Olympics 2018 will travel to 17 Indian cities with 450 shows, 600 ambience performances and 250 power packed youth forum shows with participation of 25,000 artists from the globe. The festival will be concluded on 8th April, 2018, with a grand ceremony at the iconic Gateway of India in Mumbai.

The theatrical extravaganza is being hosted in India by the National School of Drama under the aegis of Ministry of Culture, Government of India.The theme of the 8th Theatre Olympics is “Flag of Friendship” that aims to bridge borders and bring people of different cultures, beliefs and ideologies together through the medium of theatrical art.

The National School of Drama is the torchbearer of theatre in India and has trained some of the most respected actors and theatre stalwarts of all time. Established in 1959, it has a proud legacy spanning over six decades of theatrical perfection. Hosting the 8th Theatre Olympics adds another feather to the cap of this historic institution.

The festival is considered to be the biggest international celebration of theatre in terms of plays, participants, performances and number of days. During the festival, plays will be held in Agartala, Ahmedabad, Bengaluru, Bhopal, Bhubaneswar, Chandigarh, Chennai, Delhi, Guwahati, Imphal, Jaipur, Jammu, Kolkata, Mumbai, Patna, Thiruvananthapuram and Varanasi.

Numerous allied activities like seminars, symposia, ‘Interface’ and workshops with well-known academicians, scholars, authors, actors, designers and directors are scheduled to take place across 17 cities. The allied programs would boast of 60 ‘Living Legends’ series and 50 ‘Master Classes’. The 8th Theatre Olympics would also include 2 international seminars in Delhi and Mumbai with 6 national seminars in Bhopal, Bengaluru, Chandigarh, Jaipur, Kolkata and Varanasi.

The best way to preserve knowledge is to pass it on. Upholding this spirit, the students of National School of Drama are all pumped up for the theatre festival. Through the youth forum of National School of Drama, “Advitiya 2018”, young voices are being channelled through street plays, music bands, short play writing and theatre reporting. There will be a competition on short play writing with cash prizes of INR 25,000, 50,000 and 1 lakh.

“I thank and congratulate the international theatre community for providing India this grand opportunity. A country is recognised by the richness of its culture. Although technology has changed our lives, theatre has its own identity, strength and importance.We would witness the world’s largest cultural confluence with 65 global productions. Theatre mirrors our lives and is a strong and powerful medium which intricately and beautifully portrays social issues on a larger platform. India is proud to host the 8th Theatre Olympics 2018 and showcase its cultural strength to the world.” says Union Minister of State for Culture (IC), Dr Mahesh Sharma.

“We are delighted that India has joined the league of nations who have previously hosted Theatre Olympics. Through over 300 iconic plays, India’s cultural prowess would reach new heights as the global carnival travels through India”, says Sujata Prasad, Additional  Secretary, Ministry of Culture, Govt. of India.

“Art has been the earliest form of communication. Nothing gives an artist more delight than performing in front of an audience that appreciates art, no matter from which part of the world they come. In a way, theatre is a great equalizer and unites people of multiple cultures and traditions under one umbrella. We are extremely proud to bring the world’s largest theatre festival to India. During this 51-day long nationwide celebration of the 8thTheatre Olympics, we attempt to bridge the borders across countries through the call of theatre and engage in creating a global village,” says Dr. Arjun Deo Charan, Acting Chairman of National School of Drama Society.

Prof. Waman Kendre, Director, National School of Drama, whose vision made it possible to bring the world’s largest theatre festival to India, firmly believes that to regain the past glory of our nation we must make it the cultural superpower of the world.

“For the past 3 years we had the dream to bring Theatre Olympics to India. The dream that we had seen has come true. Since we began to envision and achieve this feat, Dr. Mahesh Sharma and the Ministry of Culture have extended whole hearted support to the idea and have played an instrumental role in making it a reality. Throughout centuries we have seen playwright like Shakespeare and Bertolt Brecht becoming a part of Indian theatre, while despite having our own extraordinary playwrights and theatrical figures, we are still to make similar impact. This is a huge leap towards that direction of putting Indian theatre on the world map. We should be proud of our theatre legacy that is more than 2500 years old. The8th Theatre Olympics provides a unique opportunity for cultural exchange through the medium of theatrical art. With this international event, we wish to express our theatre practices, its variations, philosophies and the sheer strength of our texts, narratives and ways of presentation in front of a global audience. In return we extend our arms to welcome the practices, ideologies and philosophies of visiting performers. The objective is to create a platform for conversation between Indian and global artists with an intent to enrich our collective understanding and expression of art,” says Prof. WamanKendre.