National School of Drama (NSD) nurtured me like a Mother: Govind Namdev 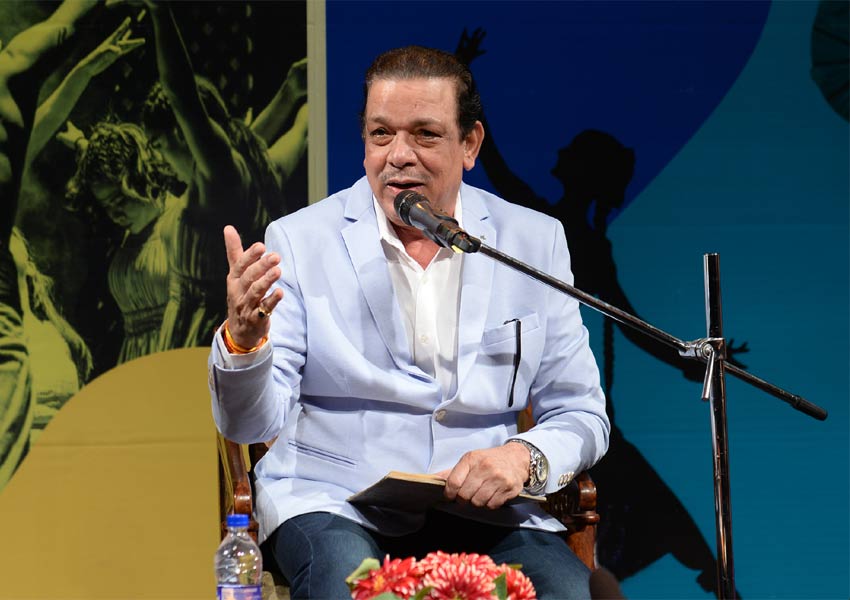 Govind Namdev an actor with many feathers in his hat, graced the 21st Bharat Rang Mahotsav and delivered his findings to guide the students to be a better artist. The conversation was facilitated by faculty of National School of Drama (NSD). “NSD is like a mother to me, like a mother nurtures its children NSD has nurtured me just like that,” Namdev remarked. Moving ahead Namdev told about what acting means to him, “Acting is spiritual for me and it pushes me to do be dedicated to it. When asked about the toughest role of his career Govind Namdev said, “There were two characters that I have encountered one in my career in repertory Othello and one in Bollywood with the film Virasat.” The session concluded with a small showcase of difference between acting for camera and for a live audience.

Jetuki Bai is a character in a famous song of Late Rudra Barua. Jetuki lives in a village situated at the bank of a river and her presence is a must on every occasion. She takes responsibility of everything from weaving on the loom to singing marriage songs. Young Naren and Tileswari were in love but their parents were opposed to their relationship. Jetuki, to whom Tileswari was like her daughter, persuaded both their parents to agree to their relationship.

But Jetuki Bai has a past… When she was a young girl, Jetuki fell in love with Bolai when he came to their village for fishing. They got married. One day Bolai went somewhere for a few days and did not return. She tried to find him but there was no information of his whereabouts. Jetuki gave birth to a girl child Sonpahi. After a while there were floods in the village and she lost her child too. From then on, Jetuki started work­ing and helping all the families of the village, and spreading the spirit of humanity among the villagers.

After the 16 days of continuous defeat, on the 17th day, before going to war, Karnan visits his wife as it could be his last visit. His wife refuses to see him and calls him low-born. Then Karnan reveals the secret of his birth that he is the first son of Kunti and Sun god, and the eldest Pandava. His wife implores him to join their side in the battlefield. He refuses saying that it was Duryodhanan who accepted him despite his birth. In the battlefield, Karnan is defeated through Krishna’s deceit. In a conversation with Duryodhana, Karnan reveals that he has readied the weapon of war, Nagastram, to kill Arjuna, but he needs King Salliyan as charioteer to depose or challenge Arjuna in the war.

Djyrybyna, The Warrior Woman is an ancient Yakut legend about the importance of each thing’s place in our universe. Our universe is composed of three worlds. The lower world is a place where evil spirits live. The middle world is a place for human beings and animals, and the upper world is where our ancestors and good spirits live. There was a baby who was born to be a hero and to defend the people’s world from evil spirits. The lower world stole him and Djyrybyna, who was supposed to become his wife, went through the three worlds, defeated all enemies and obstacles and brought the man back to the people’s world.

UPAL BHAADURY…TALE OF A DEAD STAR

Upal Bhaadury…Tale of a Dead Star is based on the life of a living legend Sri Chapal Bhaduri. He is a renowned female impersonator in Bengali Jatra. As a teenager, after the death of his mother, Chapal Bhaduri came to perform in Jatra for the purpose of raising money due to severe poverty. His voice was girlish, so he got a chance to play female roles. For this, he had to endure humiliation by the society. After a while, Chapal Bhaduri became ‘Chapal Rani’. Gradually he became a popular actor and a star of Jatra world. But the moment female artists joined the Jatra, Chapal Rani was rejected. The ‘rani’ began to work as a servant in households for survival. In exchange for a little money, he started singing bhajans in front of the temples, slums and streets of Kolkata. Someone from theatre saw his performance and gave him an opportunity to perform in theatre. According to Chapal, Jatra has given him money, but theatre has given him respect. Chapal Bhaduri has played the role of Upal Bhaduri in this play.