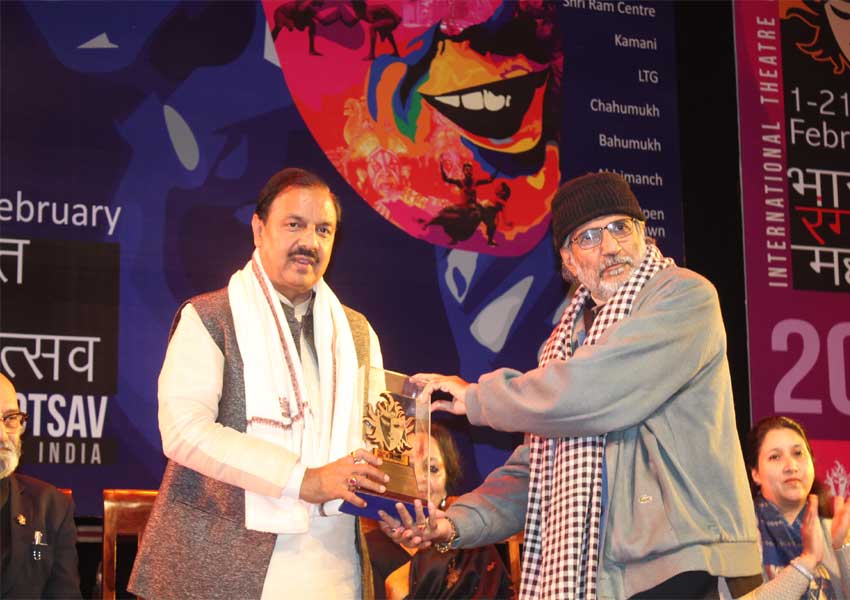 National School of Drama (NSD), an autonomous institution under the Ministry of Culture, Govt. of India, inaugurated the 20th edition of Bharat Rang Mahotsav (BRM) in the national capital.

Shri Suresh Sharma, Director In-charge, National School of Drama, welcomed the guests at the inaugural function and thanked the members of international and national theatre fraternity for gracing the occasion with their presence. He spoke in detail about the wide variety of plays to be staged during the festival and allied events such as ‘Living Legend’ and ‘Master Class’ to be held in New Delhi and 5 other cities.

Speaking at the function, the Hon’ble Minister of State for Culture (I/C), Minister of State for Environment, Forest and Climate Change, Govt. of India, Dr. Mahesh Sharma ,says, “This country applauds those who give back to the society. This country of 132 crores is bound together by culture and art. Our Prime Minister once told me that rich heritage and culture is our strength. Our art is our lifeline. We should use the power of art for the sake of humanity. Theatre Olympic helped create a new identity and BRM’s spread to other cities help consolidated that. I request the Chairman and Director to change 20-25% invite for people who are new and young.

“We often confuse ‘Natya’ with ‘Natak’. Natya is much vast that includes music, songs, dance, and drama. That is why Bharat wrote ‘Bharat Natya Shastra’. Your selfless pursuit of art will help you to excel I wish all the best to the festival.” says Classical Indian dancer, Guru, Choreographer, Scholar & Author on Indian Socio-Cultural traditions and Hon’ble Member of Upper House of Indian Parliament (Rajya Sabha)  Dr. Sonal Mansingh.

The inaugural ceremony was followed by a 50-minute musical performance ‘Karanth ke Rang’ based on the compositions of late Shri B V Karanth, directed by Shri Amod Bhatt and presented by Rangpurva group, Mumbai. Shri Karanth was a well-known director, actor and musician of modern Indian theatre in Kannada as well as Hindi. His plays like ‘Jokumara Swamy’, ‘Sankranti’, ‘Huchu Kudure’, and ‘Oedipus’ were trendsetters, which touched upon aspects of language, music, songs and stylization. Shri Karanth’s use of unusual instruments such as wood, stones, etc. in creating music and his ability to blend contemporary, classical and folk genres reflected his originality and style. He was an alumnus of batch 1962 of the National School of Drama and later became its director.

The 20th BRM comes with 111 national and international acts in its basket that includes folk and other traditional theatre forms, invitee plays, and productions by the students of the National School of Drama, one of the prominent training institutions in the world.

The students of NSD graduate program will grace the festival with acts such as ‘Vacant Lot’ (Apporva), ‘Encryption’ (Susheel Kant Mishra) and ‘Privacy’ (Ajay Khatri). The festival this year commemorates the 150th birth anniversary of Mahatma Gandhi, and will stage four plays based on his philosophy and life including ‘Bapu’ (Bengali; Samir Biswas), ‘Stay Yet A While’ (English; M K Raina), ‘Satya Ke Prayog’, based on Mahatma Gandhi’s autobiography (Hindi; Devendra Raj Ankur) and ‘Hind Swaraj’ (Hindi; Arjun Deo Charan).

The festival will culminate in New Delhi on 21st February, 2019.

20th Bharat Rang Mahotsav, the International Theatre Festival of India, is Back