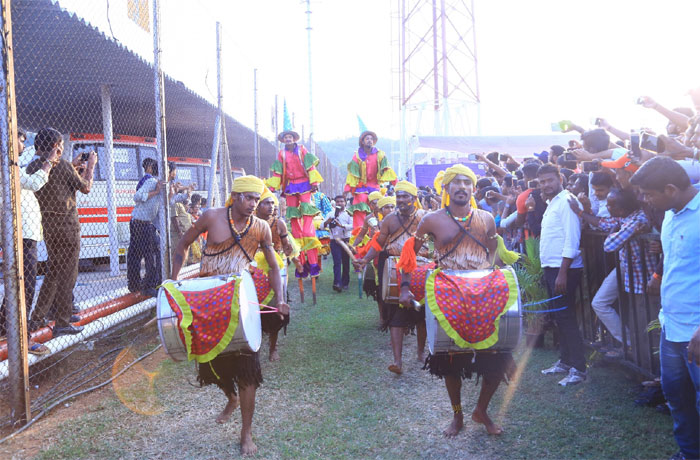 Toyota Kirloskar Motor [TKM], one of the leading automakers in the country, reiterated its support and gratitude to the state of Karnataka by hosting its 16th Kannada Rajyotsava celebrations at its plant in Bidadi, Karnataka. This event held recently was a culmination to its month long celebrations, commemorating the 60th anniversary of the state. As topics such as water conservation and the protection of rivers have been increasingly gaining significance, Toyota as a responsible corporate citizen has chosen a theme aligned in this view, honoring the rivers of Karnataka.

Toyota’s association with Karnataka State dates back to two decades, since the company’s inception in 1997. Toyota has shared a unique relationship with the state, working together to achieve a robust and balanced progress creating a synergetic association.

The celebrations featured a string of cultural events by the Toyota employees showcasing the state’s traditional art forms and varied performances such as Hulivesha (Tiger Masque), Dollu Kunitha (popular drum dance), Keelu Kudure (Imitation of the movements of a horse) by indigenous local artists. Ethnic delicacies from across Karnataka were also stalled during the program. TKM also held a book fair with classic Kannada literature.

Toyota being a safety leader has been engaging in various safety awareness over the years, in pursuance of its safety mission of ‘Safest Car with Safest Driver’ with nation-wide safety initiatives such as Toyota Safety Education Program for school children, Toyota Driving Schools teaching better driving skills, Driver Training Program at airports and many more safety drives. On the occasion, TKM set-up Safety Booth aiming to enhance the safety awareness amongst its employees, a drive to instill good road behavior. This celebration also marked the blood donation camps organized by TKM for its employees, in support to its health drives for the community benefit.

Tree plantation being another highlight of the day’s event, where the employees of Toyota engaged in afforestation activity by planting trees in the plant premises, a tribute to mother-nature.

Speaking at the occasion, Mr. Kan Asaine, Senior Vice President & Director – Toyota Kirloskar Motor, “Karnataka is one of the fastest developing states in India, driving the country’s growth to greater heights. Toyota Kirloskar Motor has had a vibrant association with the state ever since we set up our plant here in Bidadi, and have given our best to develop the community around the plant and improve the living standards.

This annual event is a great example of people not just from Karnataka, but various other backgrounds coming together to embrace the rich culture and heritage of the state. Through this event, we aim to create a sense of ownership and feeling of belongingness among our employees and also give them an opportunity to showcase their talents, as well as work together with each other as a team.

Toyota Kirloskar Motor has always given priority to environmental conservation, and through this event we also bring attention towards the role and importance of rivers in the state which form our lifelines, and would like to appeal to everyone to pledge their support to protect our great rivers, that are depleting fast”, he added.