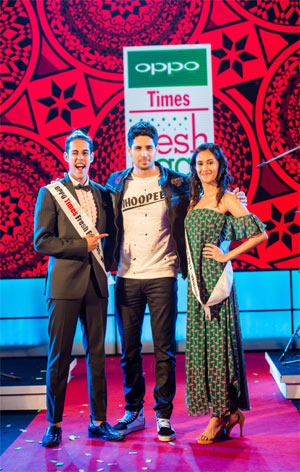 The Times of India in collaboration with OPPO launched the 10th edition of the most coveted personality and talent hunt across colleges in India, OPPO Times Fresh Face in July 2017. The Grand National Finale was held on Friday, 16th February in Mumbai where Aishwarya Dikshit and Zahan Mustafa Kachwala were declared winners via a pre-finale audience voting and finale jury round. In this edition, the property has scouted through 11 cities and 200 colleges, to present the freshest talent who battled it out at the Grand Finale to win the prestigious title of OPPO Times Fresh Face.  A calendar event among collegians since its inception, the property has helped create a distinct platform for the youth of the country to showcase their talent on a national level. Expanding over the years, OPPO Times Fresh Face has conducted auditions and events across 12 cities and over 3000 live events in the country since its inception.

The 10th edition was celebrated by taking the competition a step further with the introduction of a new concept – the Fresh Factor – which was defined as personality and talent to create a long-lasting impression. The Times of India’s flagship property, Times Fresh Face collaborated with OPPO, leading smart-device manufacturer, 2 years ago, which has extended the reach of the property across the nation garnering support from educational institutes, students and consumers alike. Along with a charming personality the National Finale winners Aishwarya and Zahan won the hearts of the jury with their stellar performances in dance and acting respectively. This year the finalists presented an assortment of diverse talents ranging from martial arts to mimicry, contemporary dance to slam poetry. The Finalists were styled by ace fashion designers Masaba Gupta, Anasha Thakker  & Nitin Singh who presented them at their best on the National Finale stage.

Like every year, the platform witnessed participation of multiple celebrities from the entertainment industry to mentor and judge the freshest college talent like Siddharth Malhotra, Yami Gautam, Kailash Kher, Ayushman Khurana among others. The platform has built a strong community of over 1mn with over 5mn engagements across social media and the National Finale held on Friay, 16th February trended globally on Twitter.

The official #OPPOTimesFreshFace has trended 12 times in a single year. Adding to the excitement of the National Finale was the enthralling live performance by Neha Kakkar which left the audience, contestants and judges spellbound.

Unveiling the 22 Finalists from 11 cities and speaking about the property’s success, Sanjeev Bhargava, Director, Brand TOI said, “As the leading newspaper of the country we believe we need to be an agent of positive change. In pursuance of this objective The Times of India has established this property with new themes and a fresh approach in each successive year. We have engaged with millions of our consumers over the past 10 years and created a robust platform for young talents to emerge in the country. It is wonderful to see young collegians participate and showcase their competitive spirit via this competition. We hope to enrich their lives and in turn inspire the next generation to follow their dreams. This pioneering initiative has become an annual phenomenon across institutes in the country and has grown in popularity year after year.”

Commenting on the association, Mr. Will Yang, Brand Director, OPPO India, said that “We are thrilled to associate with Times Fresh Face once again. This is our second year in the association and have received massive response from the audience. OPPO has always struck a chord with its young consumers and is reaching out to them through the right mediums. Times Fresh Face is one such platform which give the opportunity to the youth to showcase their talent to the world. OPPO is reaching out to different genres which interests the youth and Fashion is one of them. Through this platform we want our audience to explore the segment and showcase their ability with OPPO F5 and take their selfie experience a notch higher by clicking gorgeous & stylish selfies & group selfies and create beautiful memories. This platform is apt for reaching out to our right set of audience.”

Speaking about OPPO Times Fresh Face, actor Sidharth Malhotra said, “I feel that all these youngsters have and will gain from an initiative like OPPO Times Fresh Face, being in this competition, grooming themselves. Whichever field they join, having been a part of this talent hunt will be a plus point for them. I think that every youngster these days is well-equipped to handle themselves and I just want to wish them luck for the future.”

OPPO Times Fresh Face hosted several rounds of auditions across colleges and other venues in Mumbai, Delhi, Pune, Chandigarh, Nagpur, Chennai, Kolkata, Hyderabad, Bangalore, Ahmedabad and Indore. The shortlisted candidates performed at the City Finales; and City winners will now compete nationally at the Grand Finale, which will be hosted in Mumbai on Friday, 16th February. The two national winners will each be awarded an OPPO F5, Capture the real you phone. The event will be broadcasted live on TOI.in and will be played out on channel Zoom later.

Ashish Bagrecha releases his debut book – Dear Stranger, I Know How You Feel