Woman taking the centre stage in plays like Trojan Women 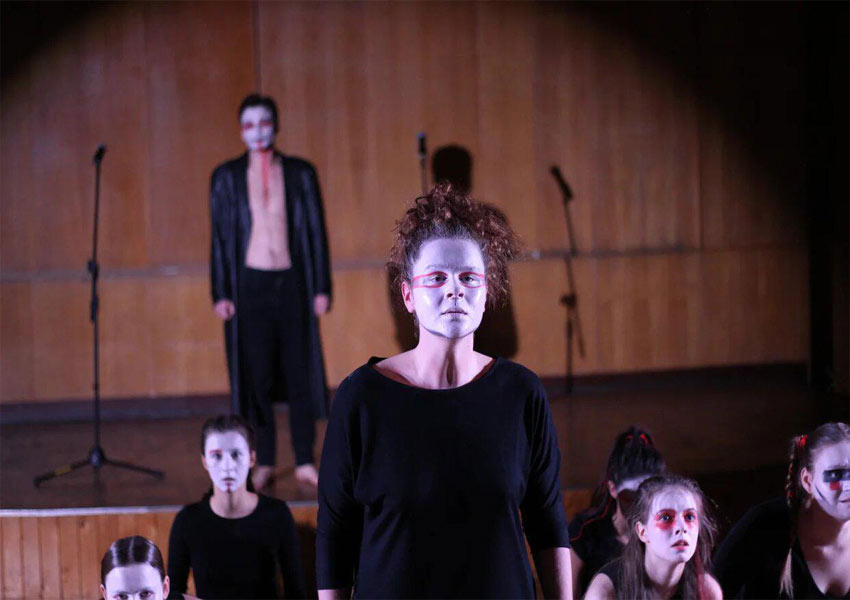 Day five of the festival witnessed plays where women taking the centre stage. Plays like Trojan Women, Yamata Amasung Keibu Keioiba and Gumm Hai entertained the audience. Trojan Women, an international production (Russian) proved that language holds no barrier as this play conveyed its message beautifully to the audience that witnessed this spectacle.

The talk today was facilitated between the directors of plays, Vast, Bury the Dead, Gurmakhao Ghoda, Nupigee Thamoi and the students. Vast, Dir. Philippe Pelen Baldini elaborated on his play saying, “From gravity to weightlessness, it is also an exploration of the body being free in three dimensions, and of its expansion into vastness.” A classic Drama Burry the Dead directed by Surya Mohan Kulshreshtha, while talking about his production he said that “I think of it more so as a surrealistic drama and not a realistic one. The feeling of anger agony and revenge is the feeling that leads to wars.” Ghoramukho Pala a play written by Late renowned play writer Girish Karnad’s play ascended to another level with the melodious music. Accepting the praise Dir. Yumnam Rajendra thanked all the audience. The last play discussed was Nupigee Thamoi this play based on legendary events of Manipur, male artistes not only enact the roles of female characters but also sing like women.

The Living Legend Daya Prakash Sinha shared about his yester years and the epics that he has created. Mr. Sinha is an outstanding playwright, actively involved in Hindi theatre for over five decades and has been decorated with many laurels. The audience was honoured to have shared the afternoon with him sharing his experiences. He shared his inspiration for writing and told that everyone has different ways of writing. He also shared that he writes when inspiration strikes him and, in any order, as it is his ambition not his profession.

The play is an attempt to interweave two folktales –Yamata no Orochi from Japan, and KeibuKeioiba from Manipur. Yamata no Orochi is a serpent-dragon in Japanese myth, who has eight heads and eight tails, and its enormous body reaches across eight valleys and eight hills. It is a legendary story of how a young ingenious boy Susanoo saves a beautiful lady Kushinada from Yamata who was about to devour her. Yamata had already devoured seven of her elder sisters. In the Manipuri tale,KeibuKeioiba is a creature having half tiger and half human features. He kidnaps a young girl Thabaton, who was home alone. However, a clever old lady manages to make Thabaton’s seven brothers take revenge and save their sister.

The play begins with two gods, Athena and Poseidon, descending from the heavens to discuss the aftermath of the war between the invading Greek armies and the people of the city of Troy. Poseidon has supported the Trojans, whereas Athena has supported the Greeks. However, she has now turned against them since the Greek warrior, Ajax, raped the Trojan princess Cassandra in Athena’stemple, which the goddess seesasan act ofgreat disrespect. As a result, she has called on Poseidon, as well as Zeus, to work with her and create stormy seastopunish the Greeks on their journey home. The gods exit, and the mortal plot unfolds. The stage shows a tent with the recently enslaved women of Troy. Hecuba, the former queen of Troy, laments the destruction of her city, and the horrible treatment her family has endured. The Chorus, made up of her former hand maidens and other noble Trojan women, joinsher, and to get her they sing, wondering what will become of them when Greeks will be their masters.

Kapil and Devdutta of Dharmapur are the heroes of our play. One comes from a Brahmin family the story begins with a child going missing in a village, and examines how an inexplicable loss irrevocably changes the dynamics within a family and the community. The varied skeins of narratives were dovetailed to examine and understand grief, loss, death, human affirmation and survival. This play was a way of engaging with the world, dealing with lost memories, and retrieval and archiving of these memories through performance and storytelling.