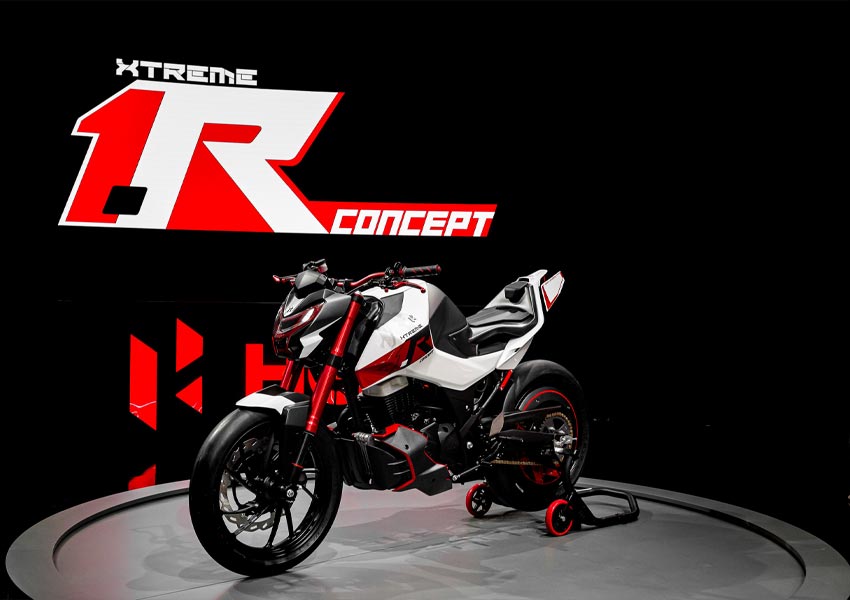 The New Delhi (India)-headquartered Company showcased the Xtreme 1.R concept at the EICMA this year, like it had showcased the XPulse 200 and XPulse 200T concepts in the 2017 and 2018 editions of the motor show respectively.

Hero MotoCorp – that has rapidly expanded its global footprint to almost 40 countries across Asia, Africa and South & Central America – also revealed a Rally-Kit specifically developed for the acclaimed adventure motorcycle XPulse 200, integrating the learnings from its Dakar Rally experience.

The Xtreme 1.R is inspired by the precision of an arrow – It boasts of an aggressive stance.  Ensuring agile and responsive handling – the motorcycle carves out corners with pinpoint accuracy – be it on urban roads or while negotiating fast corners.

Aimed at the youth of tomorrow, the Xtreme 1.R offers a sneak-peek at the next generation of the Xtreme brand. With a kerb weight of less than 140 kg, it makes every ride engaging and sheer fun. The unapologetic design, LED headlamp, signature LED tail-lamp makes for a combination that is sure to entice the racer in everyone.

The new Rally-Kit for the XPulse 200 has been developed and tested at Hero MotoCorp’s R&D hub – the Centre of Innovation & Technology (CIT) – in India. Developed by incorporating the expertise of Hero MotoSports Team Rally, which has proven its mettle in some of the leading rallies around the world, the XPulse 200 Rally kit, will serve as a catapult for young talents across the globe improving on their riding technique as well as participating in Rally motorsport events with a competitive machine.

The *kit is ready-to-fit on the XPulse 200, which transforms the street legal motorcycle into an all-out rally machine. This kitted version adds to the already-proven capabilities of the XPulse 200 and provides a new avenue to the growing off-road, motorsports enthusiasts around the world.

*Rally kit not homologated for road use.

Unveiling the Hero MotoCorp pavilion here, Malo Le Masson, Head of Global Product Planning, Hero MotoCorp, said “We are continuously innovating to enhance the customers’ riding experience. The Xtreme 1.R concept offers a glimpse into the future of Xtreme styling DNA, a concept packed with fun and bold styling. While the XPulse Rally-Kit is focused on youth across the Globe seeking the perfect machine to jump-start their rally racing potential.”

Underlining its focus on a diverse product offering across segments, Hero MotoCorp also showcased its new range of scooters – Duet 125, Dash 125 and Pleasure+.

Developed for customers across the globe, the products exude youthful styling, premium features and superior technology. Compliant with the stringent Euro IV emission norms, these scooters and motorcycles meet the market demands in several geographies across the world.

Appealing to the tech-savvy visitors, the Company displayed a Connected Section, showcasing the potential applications of connected technologies in two-wheeler riding. With the aid of a VR Riding Simulator, riders get an opportunity to ride XPulse 200 in an exciting and challenging ON-OFF track and interact with various Connected features such as Turn by Turn Navigation, Weather Alerts, Service Alerts, Call and Message Alerts, Real Time Alerts.