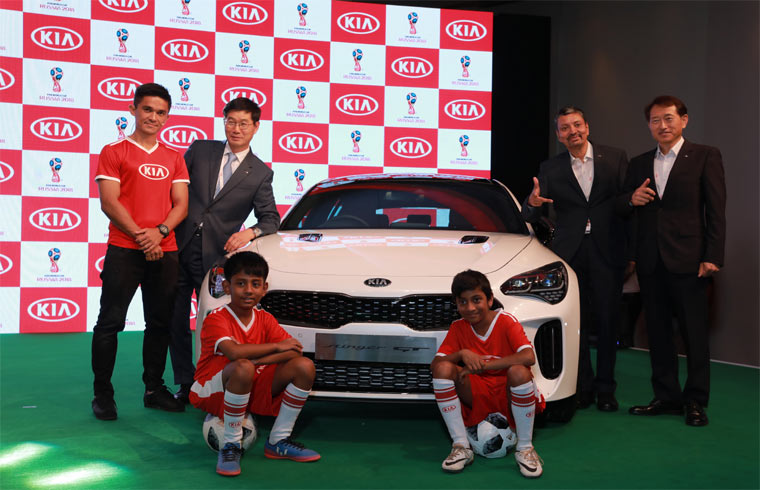 As an automotive partner of FIFA, Kia Motors India has created an exciting opportunity for Indian football players between the ages of 10-14 to experience the 2018 FIFA World Cup Russia™, as part of the Kia Official Match Ball Carrier (OMBC) program.

Karnataka’s Rishi Tej (age 10) and Tamil Nadu’s Nathania John K (age 11) emerged as the lucky winners of the Kia Official Match Ball Carrier program, bagging the honour to represent India at the 2018 Football World Cup in Russia. They will be delivering the all-important match football to the pitch where soccer legends will play for the ultimate prize in the sport.

Kia Motors India also announced that four other youngsters from different parts of the country have been selected to make the trip to Russia as spectators.

All six kids will enjoy an exclusive Kia sponsored trip to the world’s premier sporting event, along with one of their parents or a guardian.

India captain Sunil Chhetri conducted the trials in Gurgaon last month and had a tough time zeroing in on the two kids who would be the country’s first OMBCs. As many as 1600 children participated in the programme, with 50 shortlisted for the final selections.

“It was amazing to see so many talented young kids together,” Chettri said. “I thank Kia for giving this opportunity to the football-loving kids of our country. It augurs well for the future of the sport,” he added.

Rishi Tej and Nathania John K will be seen on television sets across the world as one of them steps on to the field on June 18, ahead of the Belgium vs Panama encounter; the other chosen kid will walk along with the players with the official match ball in their hand on June 22, before the explosive clash between Brazil and Costa Rica.

Under the FIFA OMBC programme, 64 schools kids from different countries, including two from India, will get this once in a life time opportunity to not only walk alongside some of the world’s best players but to also watch a World Cup match. These young people will play a key role in each and every pre-match ceremony

“It is a proud moment for Kia Motors India that these two OMBCs will be India’s official representation at the FIFA World Cup. Just as these kids are passionate about football, Kia is passionate about making great cars,” said Kookhyun Shim, Managing Director & CEO- Kia Motors India. “Our customers are those who are young-at-heart and passionate just like us. To engage with our target customers, Kia is partnering with some of the world’s most exciting sporting events such as the FIFA World Cup, Australian Open and the NBA. We are proud to bring our association with global sports to India to inspire youngsters in this country,” he added.

Nathania John Kandathil, incidentally, is the only female from India selected for the final OMBC campaign. A Class VII student at Rishi Valley School in Madanapalle, Andhra Pradesh, she made the cut by impressing Sunil Chhetri with her footballing skills. Born in a small town in Kotagiri, in the Nilgiris district of Tamil Nadu, she is equally fond of athletics and enjoys keeping track of leading sports stars in various sports.

Nathania said, “I still can’t believe this news and all I can say is that I am so thankful for getting this huge opportunity to not just represent my country as the official OMBC at the World Cup but also to be judged under the watchful eye of my icon – Mr. Sunil Chhetri.” On a lighter note, she added that the best part of the campaign was that “I beat all the boys”.

Rishi Tej, a Class 5 student at Royale Concorde International School in Bangalore, Karnataka, is not only an avid sports person but also a school topper, emerging first for three consecutive years. He has taken part in many football tournaments in the city, and has won a couple of Player of the Match awards.

Rishi said, “It was an amazing platform given to us and besides being thankful to Kia, my parents and my coach, I am honoured to be chosen as the second OMBC.”

Tags:
Previous Article
BBC Studios India and M/six’s I Can You Can wins a Blue Elephant of Kyoorius Creative Awards
Next Article
EPS appoints Mr. R. Gandhi as an Independent Director to the Board

EPS appoints Mr. R. Gandhi as an Independent Director to the Board
MediaInfoline Jun 12